The course explores a variety of building techniques: pinching, slipping and scoring, coiling, slab-building, and throwing on the wheel. Through a variety of projects, students learn about texture, form, and structure. Materials fee: $50.

This course is designed to raise awareness of local and global needs, to offer support and work to various organizations, and to instill the values in offering one's time, energy, and other resources to those in need. Discussion and action revolve around themes such as homelessness and housing, health care, education, and children. In a typical summer, students visit a homeless shelter and a nursing home, volunteer in a children's reading program at a local library, and raise money for the Food Bank of Western Massachusetts or other charities.

Students learn to write graphical programs that explore fundamental computer science topics. Through learning to program, they apply logic and critical-thinking skills applicable to a broad range of disciplines. The course covers conditionals, loops, arrays, and basic object orientation, as well as the creation of simple games.

This course includes camera basics from shutter speeds and apertures to depth-of-field, use of flash, and more. The class emphasizes taking high-quality photos under varying conditions and includes landscape photography, close-ups, portraits, and sports. Students must have their own digital SLR camera.

In this course, students explore acting, improvisation, and mime. They practice presenting monologues and prepare a production to be presented to the NMH community at the end of the session. 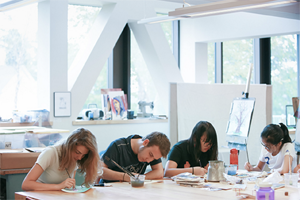 This course is tailored to the individual interests and abilities of the students and provides an opportunity for students of all levels to develop their artistic talents in drawing and painting. Materials fee: $50.

This course is the study of Western music, including western and eastern Europe, Russia,  and the U.S.; classical traditions in South America; and modern concert and film music. After the fall of Rome in 476AD, for the next 1000 years, the Medieval period, music from the Christian church dominated the scene in the form of Gregorian chant and began the development of harmony. The Baroque era saw the rise of the orchestra. The Classical era gave birth to the symphony, string quartet, concerto. Emotion and descriptive music came to the fore in the 1800's, the Romantic era. 20th century music began a time of great experimentation. Electronic music began its rise in the 1960's, and film music became an integral part of the concert scene. Many composers from South America, Russia, and the U.S. came to the conservatories in Europe, spreading these traditions throughout the world.

Students learn the principles of effective public speaking and have a chance to practice what they are learning. Participants try various forms of public address, from brief improvisational talks to formal speeches.

This course examines various forms of renewable energy and their positive benefits for environmental sustainability. Students learn about energy, energy transformations, and efficiency in the context of renewable energy sources through on-campus study as well as field trips to local solar, wind, and hydroelectric energy-producing facilities.

This course, taught by Summit Educational Group's verbal and math instructors, focuses on the academic skills and test-taking strategies required to succeed on the SAT. Summit provides students with a program of instruction customized to meet their individual needs and maximize their scoring potential. Convenient options fit into any student's schedule:

Students in this class form a singing group that practices and learns songs together (and perhaps performs for the Summer Session community). Music selections—both style and specific pieces to perform—are based on the interests of the participants. No experience is necessary, and the ability to read music is not required.

Summer Session at a Glance
Powered by Finalsite