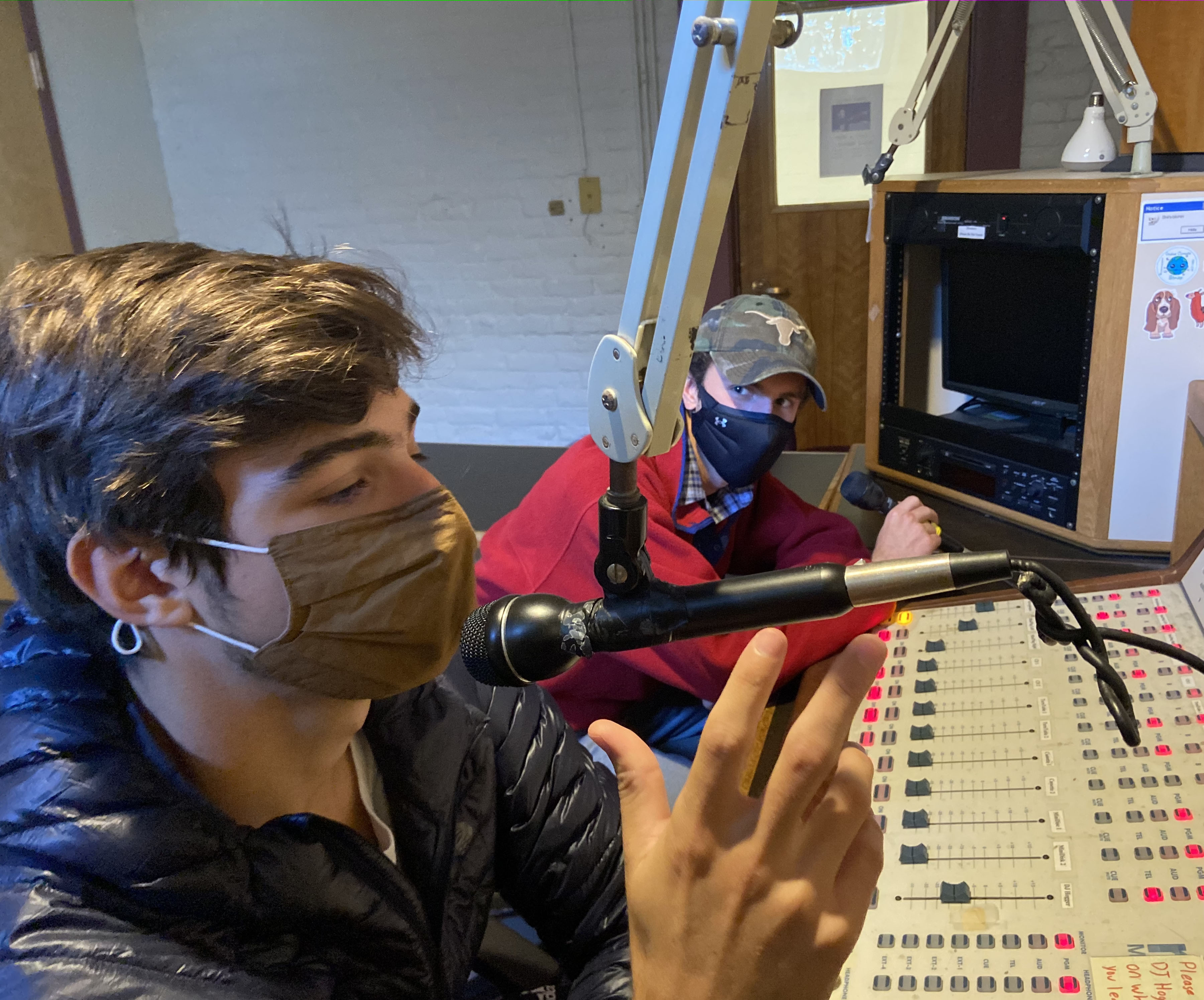 Nov. 9, 2020 — Last week on election night, any political detail, no matter how small, was up for discussion on WNMH, the school’s radio station. Were the counties in Ohio and Georgia leaning Republican or Democrat? How viable are third-party candidates like Kanye West? How about that eyepatch on U.S. Rep. Dan Crenshaw of Texas? And who, hypothetically, would be more successful in a decathlon, Donald Trump or Joe Biden?

This was the on-air commentary from Jason Smith ’21 and Tyler Unruh ’21, who hunkered down in front of the mic from 8 to 10 pm on Nov. 3. Instead of playing the usual music, they offered quirky, astute observations as the nation, and much of the NMH campus, obsessively monitored the U.S. presidential vote count.

Smith describes his politics as somewhat left of center; Unruh is more conservative. Neither wanted to debate on the air. “We didn’t want to get into any partisan statements about ‘This is what should happen.’ We just wanted to provide some discussion and an open forum, in real time as it was happening,” Smith said.

The station’s phone line was quiet for the first hour or so, but Smith and Unruh kept up a steady banter as they tracked updates from CNN and Fox News. They covered ranked-choice voting — “I had a conversation with my grandmother about it, and we decided it’s not a good idea,” Smith said. They discussed the age of the candidates: “It’s crazy that there are two almost-80-year-olds running for president,” Unruh mused. “What does that say about our country?”

Both students say they’ve followed politics for years. “Talking about current events at the dinner table is a normal thing in my family, and having our own opinion is something that’s stressed, too,” Unruh said. Smith explained that he wanted to change up his regular Tuesday night radio show on WNMH because “there probably won’t be another election quite like this one, and it felt important to have some coverage — to break it down for the average student on campus who might not know a lot about what’s going on.”

By 9 pm, the phone was ringing consistently. The calls ranged from the serious — what did Smith and Unruh think about America’s two-party system? — to the not-so-serious — who had better hair, Trump or Biden? There was a request called in for a pizza with pepperoni and mushrooms, but also a comparison between the 2020 election and elections that took place more than 200 years ago, when George Washington was president and a large portion of America’s population could not vote.

Shortly before 10 pm, Smith and Unruh began to wrap up their show — they had to get back to their dorm rooms and finish their homework. “Keep it respectful and civil out there,” they advised listeners. “Don’t resort to hatred or nastiness. That’s not going to get us anywhere.”