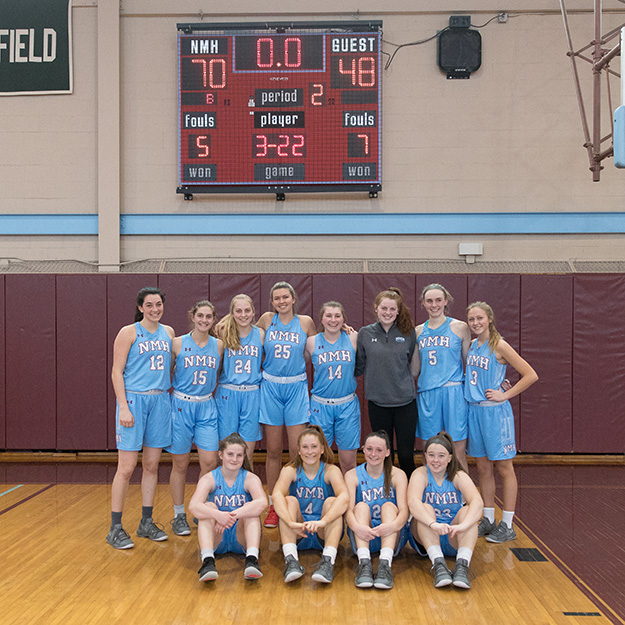 Success, On and Off the Court

“It’s going to be hard to match what this particular group has done this year,” she says.

The team racked up a 21-3 season — the most successful in girls’ basketball history at NMH. They also tied a school record for the best start to a season, with a 14-game winning streak. They won the New England 8 Tournament for the fourth consecutive year, and individual players picked up honor after honor: one made it into ESPN’s top 100 players in the country and was a Gatorade Player of the Year nominee; two were named McDonald's All-American nominees; three were New England Prep School Athletic Council Class A All-Stars; and in the New England 8 Tournament, one was named an All-Star and two were named Most Outstanding Players. Four seniors are committed to play on Division I and Division III college teams.

All the accolades are fantastic, Rehnquist says, but they’re not everything. “What’s intangible is everything the team leaders” — seniors Grace Heeps, Silke Milliman, and Bella Ceseretti — “have done for this program in terms of culture. They have set the tone and pace for where this program is going in the future.”

“Everyone found a place on the team,” Ceseretti says. “We had a tight-knit group and it showed on the court. Even now that the season is over, we still have meals together every day.”

However, Rehnquist and her team captains admit it wasn’t the smoothest of starts. Heeps says everything felt “rocky” at the beginning of the season, despite the initial winning streak. “We weren’t playing that well even though we were winning,” she says. Milliman added, “We were feeling a lot of pressure because last year, we were good, but it was surprising. This year, everyone knew we were good, so we had to prove it.”

So how did the team go from “rocky” to record-breaking? The turning point, says Heeps, came a month into the season, after a game against St. Paul’s School that NMH won easily but with shoddy play. “We were not together, not consistent,” Heeps says.

“This is a talented team, but talent only gets you in the door,” says Rehnquist. “It’s the effort you make between minute zero and minute 32 that matters. We walked into the St. Paul’s game expecting to win, and that’s when these girls realized that talent isn't always going to get you the result that you want.”

Afterward, the team watched film of the game and reflected on how they played. Rehnquist told them, “You're all physically pushing yourselves, but you need to do more. Putting in effort isn't the same as working hard. That's just you doing your job. Working hard is when you dive on the floor for a loose ball every time; when you pursue a rebound with two hands, two eyes, and two feet every time.”

“We broke down all the clichéd things that coaches say and defined them. After that, they all knew what we meant when we said, ‘Work harder.’”

Then Rehnquist put the team through the hardest practice they’d ever had. But it also was the first practice where “everyone completely bought in,” Milliman says. “We were all just killing ourselves in every drill. We got into a rhythm.”

Rehnquist knows that, statistically, next year will be tough without Milliman, who averaged 20 points a game as a forward, and Heeps, who averaged seven assists as a point guard. But she sees her team as “12 players who really bought into being citizens of this school.” That’s the foundation she most wants to build on.