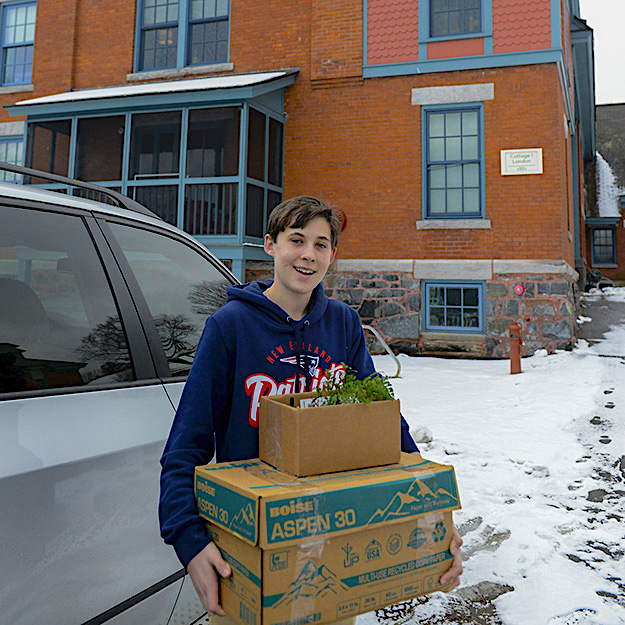 London — the ninth-grade boys’ dorm that shut down right before school began last fall because of flooding inside the building — re-opened just in time for students to settle back in for the winter and spring terms. Twenty-nine ninth graders, six Resident Leaders (RLs), and four resident faculty returned to a renovated home following the winter break and pronounced it “really nice,” according to RL Dillon Stone ’21.

“All the kids seem pretty happy,” Stone reported, two days after moving back into the dorm.

The footprint of the historic three-story building didn’t change, but within four months, the entire first floor and most of the second floor were rebuilt, with new walls, electrical wiring, plumbing, and insulation. All three floors got new flooring and fresh paint, and an upgraded fire-safety system was installed throughout the building. “It was a massive undertaking, and it took a lot of coordination with a lot of people,” said Project Manager Jeff Seymour.

The timing of the renovation stemmed from a sprinkler-system accident that resulted in significant flooding and water damage just days before students arrived on campus in early September. In a last-minute residential change, London residents had to move with their dorm head into the Lower Mod, an academic building that for years had housed the English department. Within a week, classrooms were converted into six-person living spaces, bathrooms were expanded, and a common room and laundry room were added. English teachers moved their classes into other academic buildings on campus. Mary McEneany, assistant head of school for finance and operations, said that although “the logistics of relocating students in a timely manner were challenging, NMH staff and faculty members rolled up their sleeves and got it done.”

Although London was not scheduled to be renovated during the academic year, the dorm had been part of a campus-wide facilities plan to update the school’s older dorms. North Farmhouse, Hayden, and Oaknoll already have been upgraded, and next on the list is Manchester, another ninth-grade dorm, which will be renovated at the end of the current school year. “The goal is to work on one or two dorms each summer,” Seymour said.

Living in a newly rehabbed dorm is “exciting,” says Stone, but being back in London is also about building on the “great sense of camaraderie” that already exists among the dorm residents. “I think this new set-up will help the kids be more reflective,” Stone explained, referring to the standard two-person dorm rooms that the ninth-graders moved into. “When you’re living in a room with five other people, you have to conform more — not in a bad way, but you want to make sure you’re not doing anything that makes them uncomfortable. When you’re in a room with one other person, you can expand on yourself, and you’re also going to connect with your roommate in a different way. So this is going to create both more individuality and deeper connections.”

Above: Alex McCullough ’23 settles into London, his new home on campus. Photo by Sharon Lindale P’17, ’20