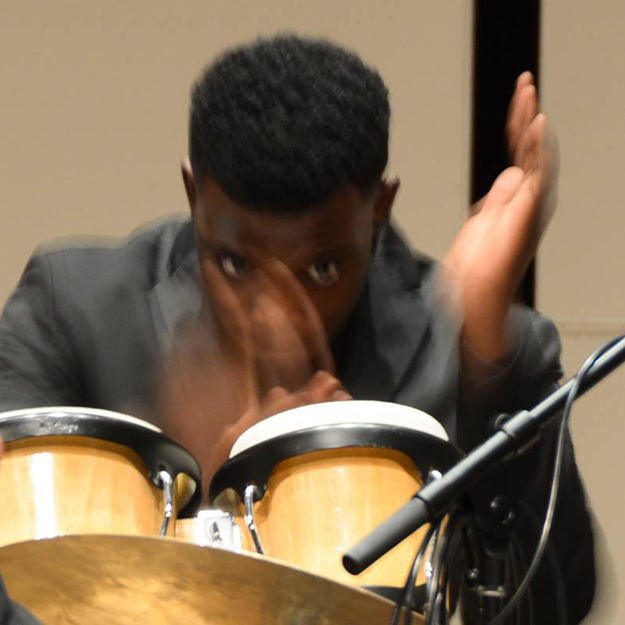 Next stop: the Newport Jazz Festival

Aug. 3, 2018 — The first Newport Jazz Festival, 64 years ago, featured legends such as Billie Holiday, Ella Fitzgerald, Oscar Peterson, and Dizzy Gillespie. This year, the three-day festival included not only a 21st-century lineup of greats — Christian McBride, Charles Lloyd, Andra Day, Pat Metheny — but also up-and-comers like NMH’s own Jacob Smith ’21, a drummer who played with a Berklee College of Music ensemble the first day of the festival.

“It feels crazy,” Jacob says. “All these great musicians that you hear millions of stories about, they all played [at Newport]. And the fact that you get to be a part of it — it's amazing.”

Jacob, 15, is one of a few dozen high school and college students invited to participate in Berklee’s 2018 Global Jazz Institute. The five-day, all-expenses-paid workshop at Salve Regina University in Newport, Rhode Island culminated with an appearance on the festival stage. During the week, the students took classes and played music together for more than 12 hours each day, but the intensity didn’t faze Jacob. “The more I found out about it, the more I was thinking, ‘Wow, I get to do that. And I get to do that, too.’”

Jacob, who started drumming — on a real drum set — at the age of 2, describes himself as an “aggressive” musician. “By that I mean I want to learn as much as I can, as fast as I can, and if I run into a roadblock, I'm going to figure it out,” he says. During the school year, he studies with a drummer in New Hampshire, and plays in NMH’s jazz and percussion ensembles under the direction of his father, music teacher and saxophonist Ron Smith; Jacob also plays hockey and runs track. Before the summer Berklee Institute and the Newport Jazz Festival, Jacob participated in week-long jazz workshops at UMass–Amherst and the Vermont Jazz Center. He also packed his drumsticks for a family trip to Memphis, Tennessee, to visit relatives — in case any jamming opportunities arose. He says, “My dad tells me to bring them every time we go.”

It’s part of Jacob’s routine to have them at the ready. He practices daily, either on his home drum set or in NMH’s Rhodes Arts Center, “to keep my hands loose and warm, so I don't freeze up and get rusty,” he says. “One of the biggest mistakes you can make is to think, ‘OK, I'm good enough, I can relax, and kind of just coast.’ Music is the type of thing where we’re all beginners and we’re all still learning new things. It’s just a matter of what we learn next.”