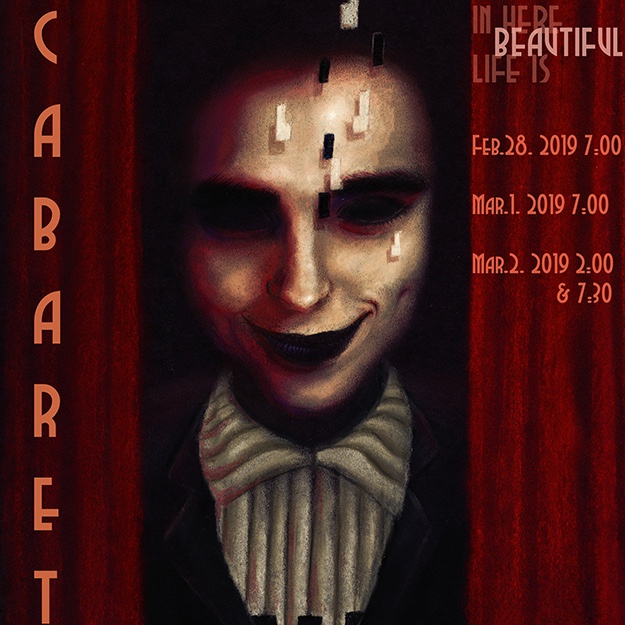 Life’s Not a Cabaret, Old Chum: the Art of Provocation

Feb. 21, 2019 — NMH’s winter mainstage play, Cabaret, appears at first to be just a good-time romp. It’s set in a sleazy nightclub where headliner Sally Bowles sings her heart out nightly and the master of ceremonies helps the audience to leave their troubles outside.

But since the play is set in Berlin during the Nazis’ rise to power, Cabaret’s characters have troubles that can’t easily be ignored. Nor should they be, the NMH show’s directors say. As denizens of the Kit Kat Klub wallow in decadent entertainment, the play’s subversive message — what happens to society when people remain silent about evil — becomes increasingly obvious.

The Season of Provocation
Cabaret is part of what Heffernon calls the department’s “season of provocation” —  productions designed to make participants and audiences think about larger issues embedded in performances. “We have very intentionally created a season that teaches students that art can be about activism and making change in the world,” she says.

The Feb. 14–16 dance theater production, Antigone, gave Sophocles’ ancient tale a modern twist and raises moral issues about civil disobedience, fate, and free will. Its time-honored story shows the power of one woman who stands up for her rights, and the sacrifices doing so may require.

The Concert Choir’s Feb. 17 benefit concert for Big Brothers Big Sisters of Franklin County commemorates the one-year anniversary of the shooting at Marjory Stoneman Douglas High School (MSDHS) in Parkland, Florida. The concert, “We have not forgotten,” includes a song composed by two MSDHS students that carries a strong anti-gun-violence message. Heffernon, the choir’s director, also sent a video to MSDHS of the NMH student body saying in unison, “We stand with you.”

Heffernon says she hopes the season’s productions inspire students “to think about the consequences of saying nothing, and about their responsibility as world citizens.” NMH isn’t telling people what to think, but, she adds, “we are definitely provoking students to think about the topics, and to begin to find their power and their voice. They’ll be voting in a few years, and we want them to understand that they are the future.”

A Curriculum for Cabaret
The cast and crew of Cabaret spent months learning not only their lines, music, and blocking, but also working through a whole curriculum about the world in which the play is set. They learned about period fashion, theater, and art, and read about the Nazi’s rise.

“People are beginning to forget about World War II and the Holocaust, and that is incredibly dangerous,” says Auerbach. “The most important thing to understand about Cabaret is the fundamental history of hate to which this story alludes. I approach this show as a young Jewish woman equipped with an understanding of this horrific time. I want audience members to leave thinking about what the world once was. When we forget, we allow things like this to happen again.”

Nik Franke ’19, who plays the emcee, was raised in Switzerland. His dad is German, and his grandfather — who was young during the Nazi era — was oppressed for rejecting Nazi propaganda. Francke says this family background means performing in Cabaret “affects me way more deeply than it likely would an American who grew up in the U.S.”

After the Cabaret cast and crew watched Schindler’s List — about a German businessman whose pragmatism is challenged when he learns of the Nazis’ “final solution” — one student exclaimed, “I hope everybody who’s feeling sad right now is planning to get angry and do something about this!” Eberlein says, “That exemplifies what we think the performing arts can do, and hints at the power of this production.”

“We hope the audience will find that Cabaret is not so historical,” says Eberlein. “In fact, it’s about as headline-topical as you can get.”

Francke says audiences “will be entertained, but the show will also will affect you deeply. You'll walk out changed.”