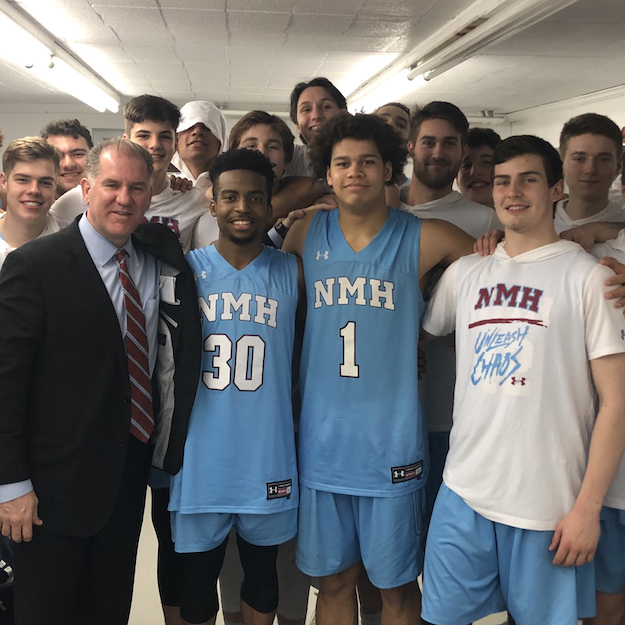 Feb. 8, 2019 — With the boys’ varsity basketball team’s Feb. 6 win over St. Thomas More, NMH head coach John Carroll ’89 became the winningest coach in NMH boys' basketball history. His 301 wins took him past the previous record-holder, NMH Hall of Famer and former basketball coach Bill Batty ’59. Carroll has been part of 428 wins for NMH basketball, including his time as a player, assistant coach, and head coach. And the season’s not over yet.

“John continues the successful tradition of NMH basketball established by Bill Batty during his many years leading the team,” says Director of Athletics Greg Leeds. “John turned this program into the dynasty that it is today, one of the very best high school programs in the nation. He emphasizes character and integrity as much as the skills of the game. For 18 years, he has helped countless young men reach their goals to become top college players, and has taught them leadership skills and how to conduct themselves with the highest levels of responsibility and integrity. This milestone in John’s career speaks to his dedication and hard work, and to his powerful commitment to the game and to the teams that he has led over the years.”

As an NMH student-athlete, Carroll averaged 27 points per game and was named MVP of NMH's 1988–89 squad, which finished 17–6. He also pitched and played first base for the NMH varsity baseball team. Before NMH, he attended Poly Prep in Brooklyn, New York, and played AAU ball with the Bronx Gauchos.

As a college athlete, Carroll was a four-year letter-winner at Assumption College. He owns the college’s records for the most three-pointers made in a season (110) and in a career (342), and is currently their 13th-highest all-time scorer at 1,551 points.

He started coaching basketball at NMH in 2001, and has racked up an array of achievements: