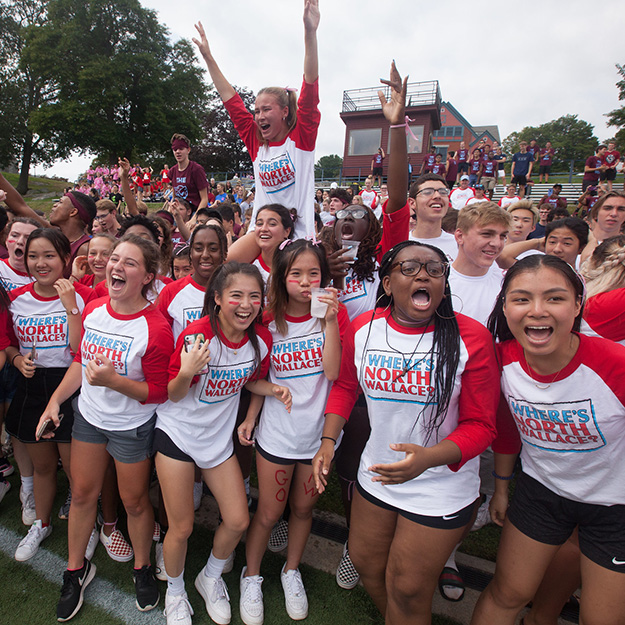 Sept. 13, 2019 — There was noise on campus this week — a lot of noise. A bass drum pounded. A conch shell sounded. Pop music boomed from giant speakers. But the loudest sounds came from NMH students themselves, cheering and chanting as they streamed out of their dorms and onto Thorndike Field for NMH’s annual Hogolympics.

It’s part spirit rally, part sporting event — a start-of-the-school-year tradition that’s slightly less ceremonial than Convocation or Matriculation. Students from each dorm don colorful student-designed T-shirts and compete fiercely to see who can ride a bike the slowest, who can assemble a tiny puzzle the fastest, and who can create the most beautiful dorm flag. Think you’re adept at stacking plastic cups into a pyramid? Try doing it at a breakneck pace without letting any topple over — with your teammates whooping and hollering in your ear. Think you have good balance? Try running a relay race while holding a ping pong ball on a dinner plate without letting it fall to the ground.

Winning is only part of what Hogolympics is all about, according to Jakob Curtiss ’20. “It’s just a good time for our community to come out and show togetherness,” he said.

But even as the music faded and conch shell was put away, the competitive spirit hung on just a little longer among students. It was lunchtime, and Pad Thai was on the menu, and everyone wanted to be at the front of the line.