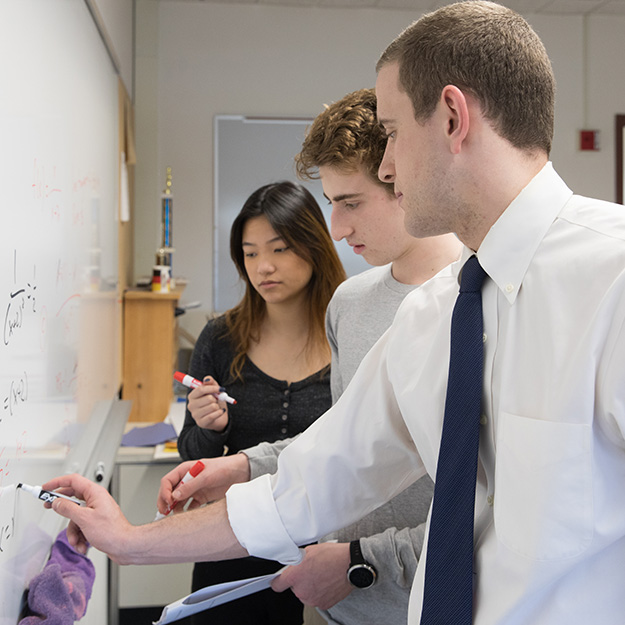 Doubling Up Academically to Get Ahead

Feb. 14, 2019 — In the fall of 2016, Cyndee Fan ’20 and Louis Salz ’20 arrived at NMH as ninth graders and were placed in Algebra 1, the school’s most introductory math class. “I definitely was not satisfied being at that level. I wanted to take harder courses,” says Salz.

So the next year he intensified his math approach and “doubled up,” taking Geometry in the fall semester and Algebra 2 in the spring. This year, as a junior, he’s doubling up again: Precalculus in the fall, and now, AP Calculus. By the end of the current school year, after three years at NMH, he’ll have five full math courses under his belt. So will Cyndee Fan, though she went a slightly different route, studying geometry at NMH’s summer school, and doubling up just one year.

It’s a lot of math. It’s also “an opportunity that exists at NMH and maybe not at a lot of other schools,” says Seth Montgomery, who taught Fan and Salz as ninth graders and currently teaches their AP Calculus class. He’s talking about CMAP — NMH’s College-Model Academic Program. NMH operates on a two-semester schedule, just as most colleges and universities do. Instead of taking five or six year-long classes, NMH students take fewer classes at a time — three each semester — but because each class period is nearly twice as long as a typical high school class, teachers and students are able to cover more ground. And there’s room for students to move beyond curricular requirements and take more classes in a subject they’re interested in, whether that’s math, science, or art.

Registrar Jay Ward says that every year, roughly a quarter of NMH students do that. It all depends on what kind of academic ground they want to cover. “You can make choices,” says Fan. “Math was never my favorite in school when I was younger, but starting with Geometry and going into Algebra 2, I found myself starting to understand it more easily every year as I got deeper into it.”

Montgomery believes that CMAP allows students to grow, and not just because they master certain topics — though it is the reason why so many NMH students take Multivariable Calculus, he says, which is typically a course taken during college. “Every time you go through a class, you learn how to study, how to carry yourself,” he says. Fan and Salz are proof. Because they’re already on their fifth math class as juniors, they’re “more mature academically” when it comes tackling concepts, Montgomery says.

It’s true, admits Salz, and not just when it comes to math. “I had really awful time management my first year here,” he says — echoes of his middle-school procrastination habit. “Now my game is, Can I get all my homework done by 10 o’clock, so I can sleep more? That’s a much better game.”