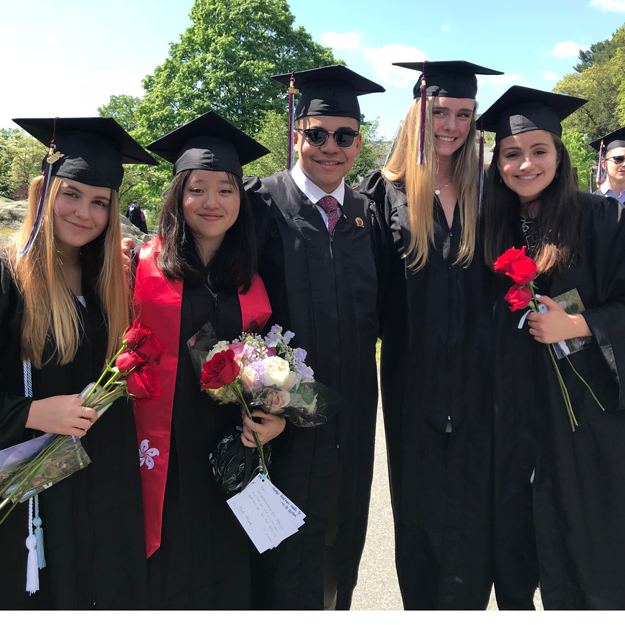 Class of 2019 Crosses the Finish Line

May 26, 2019 — It’s the biggest cliché in the world to talk about the weather in a graduation story, but this year, at Northfield Mount Hermon's 136th Commencement, there was no getting around it: It was perfect.

The 174 members of the Class of 2019 were in fine shape, too, bearing bouquets of roses and wearing triumphant smiles with their robes and mortarboards as they strode down the hill from Memorial Chapel to the giant tent where their families waited.

“Following the rainiest spring in a very long time, you have earned this glorious day,” declared Head of School Charles A. Tierney III.

After seniors JD Pruett and Amelia Simmonds each offered reflections, Commencement speaker Tiffani Brown, an alumna from the Class of 1996 and a current NMH trustee, stepped up to the podium. She compared the path that lay before the graduates to her first track meet at NMH. Her coach put her in the 400-meter race, even though, as she protested at the time, she was a long jumper and had never run the 400 before. On the track, she started out fast and was out in front, but faded partway through and could barely finish. Still, she rallied when she heard her teammates — and her opponents — cheering for her. She crossed the finish line, and said yes when the coach invited her to train for the next 400-meter race.

“You will have many new opportunities,” Brown told the graduates. “Some of them will start out amazing. But sometimes you will hit a wall and want to give up. This, Class of 2019, is life.

“You are big-vision students,” she continued. “But I want to be honest: big vision can hurt. Big vision can feel like that 400-meter race. And I want to hype you up because when you hit a wall, I don’t want you to stop running and think the race is over at 100 or 200 meters. I want you to stay the course.”

The graduates took in Brown’s words, perhaps thinking of struggles that they had overcome at NMH, on the track team, or another team, or in the classroom. Soon, though, they were crossing the stage, accepting their diplomas from Tierney, and flinging their mortarboards into the air. They sang “Jerusalem,” the school song, one last time, and exited the tent into the sun, where their families and friends were waiting.