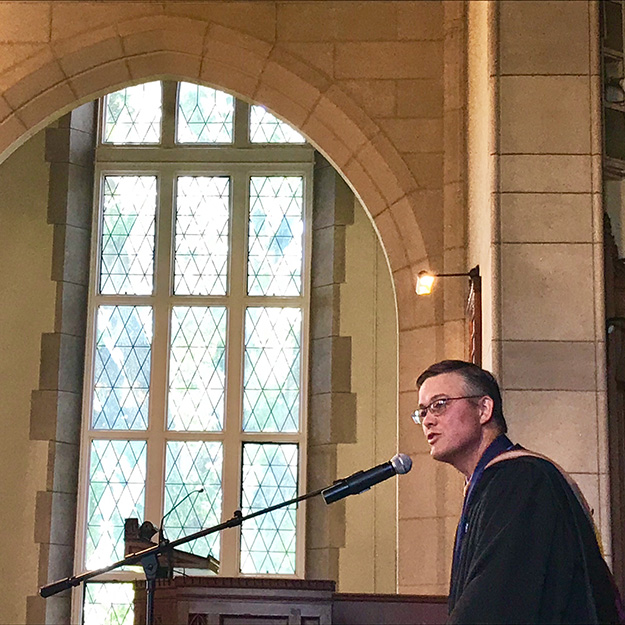 Brian Hargrove Is Installed as Head of School

Sept. 17, 2019 — New Head of School Brian Hargrove’s message was clear last weekend in Memorial Chapel as he was officially installed before an audience of students, employees, trustees, and his family and friends.

“For more than 140 years, NMH has challenged the established norms,” Hargrove said. “We have thrived by leading.” Putting himself in conversation with school founder D.L. Moody, Hargrove said, “We must lead in the very way you called us to lead — by serving others.”

Hargrove is up for that task, according to Julie Ramsey, a vice president and dean at Gettysburg College and a mentor of Hargrove’s who has known him his since his undergraduate years at Gettysburg. She said, “Brian has found his genuine vocation where his extraordinary talents will be put to best and highest use.”

Ramsey’s appearance at the installation ceremony was followed by remarks from another Hargrove friend and colleague, Marshall D. Jones, a spoken-word artist, who urged older students in the audience to join Hargrove in “carrying the torch.” Show younger students “how to leave the school better than you found it,” he said. Other speakers in the chapel included Mariah Calagione ’89, chair of the NMH Board of Trustees; Taneyah Jolley ’20; and David Powell ’48, the great-grandson of D.L. Moody.

Amid the serious sentiments and the jacket-and-tie formality, there was humor. Hargrove noted the irony of becoming head of an institution known as “the singing school” when, years ago, his second-grade music teacher once advised him to “just mouth the words” when it was time for the class to sing. “I didn’t then — and I am not now,” he said, after the sounds of “Hymn of Joy” filled the chapel.

There was also symbolism, with the Hargrove family helping to plant a maple tree after the ceremony to recognize the roots they’re putting down on campus. And there was a picnic lunch with a salsa band and dancing, and students grabbing one last monster chocolate-chip cookie before heading back to their dorms to turn to their homework.

In the chapel, Hargrove concluded his remarks with a call to carry on Moody’s democratic educational mission. “We are all here because of one man’s ability to take action,” Hargrove said. Back in the late 1800s, “when private schools were opening across the nation to serve a privileged class, Mr. Moody offered — no, he demanded — a different course.” Moody was determined to offer opportunities to students of all races, religions, and nationalities; to girls at a time when women could not vote in the U.S.; and to an African-American student who’d been born into slavery.

He was “disrupting with purpose,” said Hargrove, who seeks nothing less for the school today. Because “we live in challenging times,” Hargrove said, “Northfield Mount Hermon must lead. Let us serve with courage, gratitude, and generosity. Together, let us change the world.”