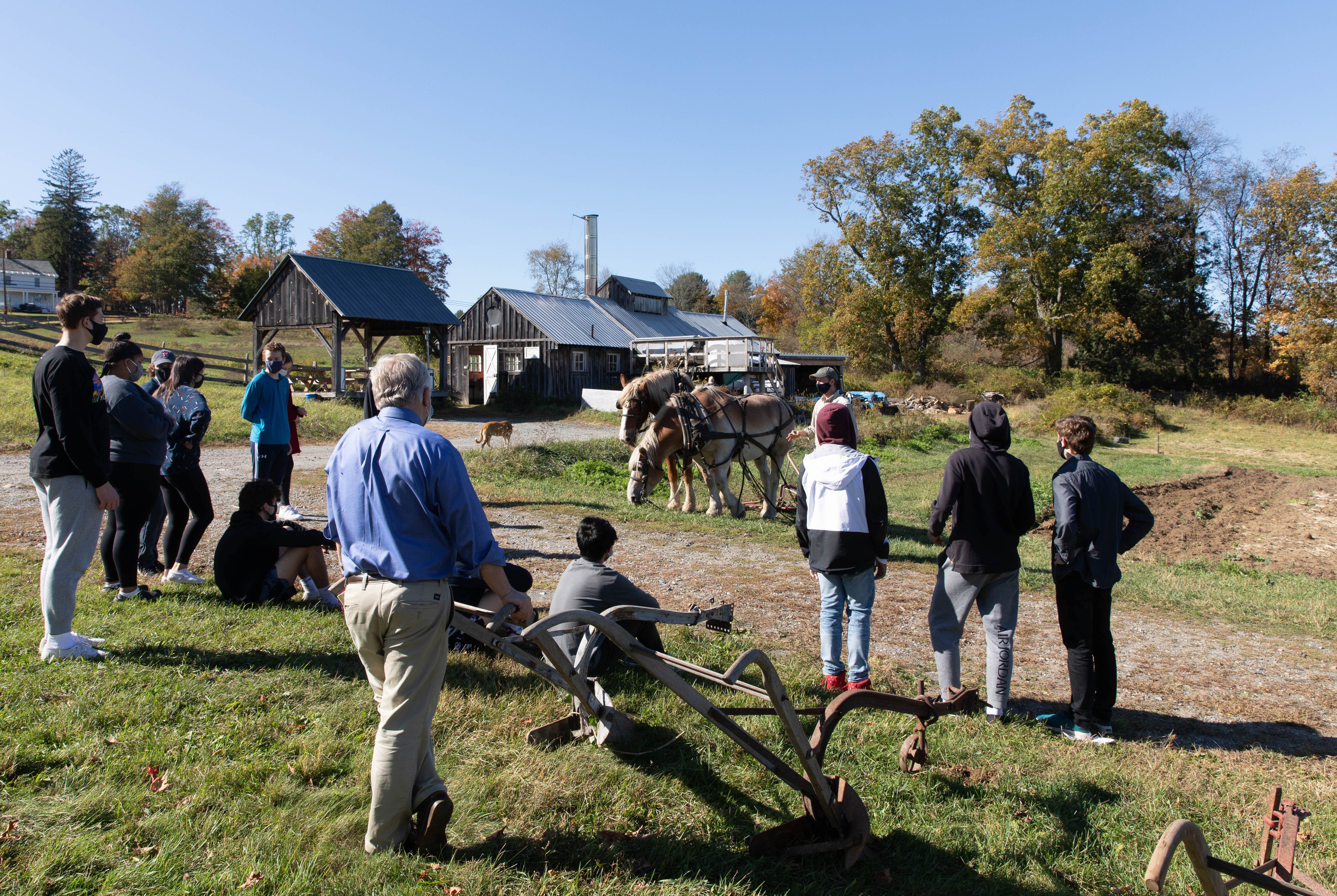 American Literature Goes to the Farm

Nov. 12, 2020 — “If you’re starting with ground that has never been plowed, think about the resistance you’re getting from the Earth itself.”

That was English teacher David Dowdy in mid-October, talking with students in his American Literature class about the challenges of agricultural life depicted in the book they were reading — My Antonia by Willa Cather. His was more than an abstract rumination, however. The students were actually plowing.

Dowdy had escorted the group on a short walk from their classroom building to a field at the edge of campus, where NMH Farm Program Director Jake Morrow and a team of draft horses — Abe and Shorty — were waiting. Morrow hitched the horses to an old-fashioned single-bottom walking plow. He showed them how to hold the handles of the plow, and offered a few more words of instruction, then off the students went, taking turns, steering the plow through the soil and leaving a slightly zig-zaggy furrow in their wake.

“My guess is that most people reading My Antonia have not had any real-life experience with plowing, or being around enormous animals, or feeling what it’s like to turn the Earth over this way,” Dowdy explained. Coming down to the farm “seemed like a fun way to interact more with the book, because we’ve got the equipment, and we’ve got a farmer who’s willing to help us.”

For years, NMH humanities teachers have taken literature into nature, walking with their students to Shadow Lake or the nearby woods to read, journal, and discuss books as disparate as Beloved and Into the Wild. Dowdy saw the My Antonia outing as going even further. Published in 1918, the novel tells the story of pioneers who moved to the Nebraska prairie in the late 1800s. Toby ’22, a student in the class, said, “Much of the book revolves around farming, and the plow is what allows the family to have a new life in the West. It’s a simple instrument, but it carries a lot of significance in the story.”

“The book talks about the main character, Antonia, plowing in the fields,” added Ella ’22. “Being able to see it in person helped us imagine it. She had to work really hard.”

While the characters in My Antonia put in long hours in their fields to survive, the students tried the plowing for just a few minutes. The act itself was easier than they expected. “I thought it would require a lot of muscle to move around, but the horses started pulling, and they took all the weight, and just the slightest movement changed the direction,” said Hans ’22. “It was kind of like riding a wave.”