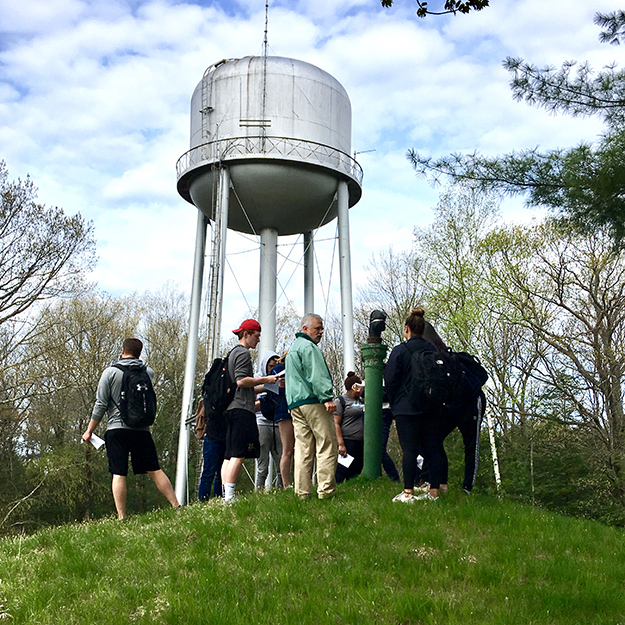 A Different Kind of Campus Tour

For example, how many pillars stand at the front of the library? Which floor of Holbrook, the administration building, has the most windows? And where is the highest point of land on campus?

With these and two dozen other questions, English teacher David Dowdy launched a lesson this spring on how to become a careful, questioning observer. The quiz he handed out to students in his senior English class proved to be a rough start. “I hardly know any of the answers!” one student lamented.

Dowdy pulled on a jacket. “Let’s take a walk,” he said. For the next 70 minutes, he served as a tour guide, leading his students on a meandering walk and pointing out the landmarks featured in his quiz.

Those pillars — six of them — in front of the library? They were designed to resemble the columns at the Parthenon, wider in the middle than at the top, so they would appear uniform and strong, not spindly, from a distance.

It's the second floor of Holbrook that has more windows — because there’s one on the first floor, in the back, that was bricked over to protect one of the school’s safes.

“I can’t believe I’ve been here four years and never noticed this stuff,” said Helen Gordon ’19. “All I had to do was look around.”

There were a dozen or so stops on Dowdy’s tour. The semicircular pathway of trees behind the dining hall? It’s called Memorial Grove, and it honors the Mount Hermon students who died fighting in World War I a century ago. “Walk between the trees,” Dowdy told his students. “These were planted for people your age, maybe a little older.”

The highest point on campus turns out to be a hill behind Memorial Grove that covers an underground water tank, and there’s a vent on top, with a pipe that looks like a periscope. “You can shout into it,” Dowdy said. “There’s a good echo.” Gordon leaned in. “Helloooooo,” she called out. “Can anyone hear meeeee?”

Dowdy leads this tour at least twice a year with different groups of students, mostly seniors and postgraduates. After ending in the chapel, under the rose-shaped stained-glass window in the balcony, he asks students — for homework — to write about what they’ve seen and to draw conclusions about the school and themselves.

Sai Pacquette ’19 wrote that, after looking at pieces of the NMH campus more closely, she found herself doing the same thing with her friends. “I really looked deep into their faces,” she said. “By actually looking at them, they became different people and it was not just because they were weirded out by my staring. I realized that while I thought I was being observant, I had only been noticing the things that pertained to me.”