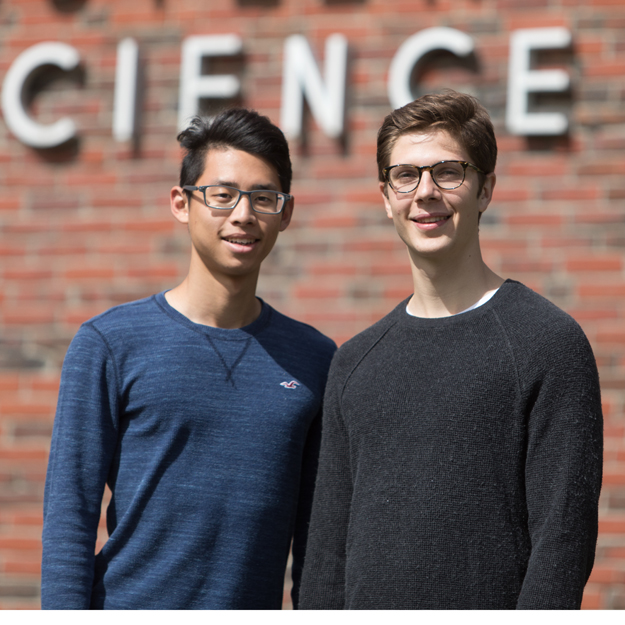 Sept. 24, 2018 — Forget the beach, the retail job, the family reunions. That’s what NMH seniors Miles Kaming-Thanassi and Ethan Ho did. Instead, they spent much of the summer immersed in scientific research at Stony Brook University.

Both took the science and math foundations they’ve built at NMH to Stony Brook’s competitive seven-week programs, where students work with researchers on  scientific techniques  that tackle real-world problems.

In an actual experiment, Miles explains, scientists send a charge through two pieces of gold with a few molecules suspended between them. Examining how the electrons pass through shows how well the combination would work in a circuit. The problem is that it would take thousands of trials to see which permutation works best. Miles’s computer simulations provide a shortcut, quickly producing aggregate data.

The software he used centered around an equation based in calculus, so Miles’s success in BC Calculus at NMH was “super helpful for my project,” he says.  “My background in calculus allowed me to work with my mentor in a way I wouldn’t have been able to otherwise.”  Miles says his NMH chemistry courses helped him understand the interactions going on in the experiment.

Jay Ward, who taught Miles’s physics courses, calls him “an exceptionally thoughtful and capable student who has a strong aptitude for science. He is patient, careful, and thorough in all he attempts — characteristics that lead to success in science.”

Miles says he will “cherish this experience because it gave me the opportunity to be a real problem-solver rather than just plugging in equations. It was cool to have to struggle through to find the answer.”

At the end of the program, Miles presented a poster paper on his work to his peers in the program. “It was new for me to explain what I’ve been doing in layperson’s terms,” he says. It was good preparation, since Miles plans a college major in physics or computer science. “Tech is advancing so fast that it’s hard to say where I want to be,” he admits, “but I definitely want to be creating things and solving problems.”

Regrowing Damaged Teeth
Ethan Ho’s interest in science runs deep. Even before this summer, he’d mastered a large percentage of NMH’s science classes, was an active member of the Science Club, and had taken an independent study course. These, he says, “gave me the background knowledge I needed and developed my research skills.”

So he was prepped and ready to, as he put it, “work at the frontier of science” this summer. For him, that meant joining a team in Stony Brook’s material science department, investigating how to get cells in damaged teeth to regrow and bond to replacement teeth.

Ethan’s team, which collaborated with Stony Brook’s  dental school, used a 3-D printer to create a plastic scaffold to simulate a tooth. The idea is to get stem cells from the pulp of a living tooth to bond with the scaffold and grow into healthy tooth tissue. His group investigated whether a layer of titanium dioxide would help the stem cells bond to the plastic and enhance cell growth. (Preliminary results showed it did.)

In addition, Ethan learned how to write a professional-style research paper and present it to a group of his peers. With that training behind him, he plans to enter the Regeneron Science Talent Search, a nationwide, research-based science competition.

Jay Ward, who recommended Ethan for the summer research project, says he “has an insatiable curiosity about the natural world and many scientific interests. He loves the pursuit of knowledge.” Ethan says the NMH Science Club activities and an independent study course with science teacher Jolene Schuster made a big difference in how prepared he felt for the summer challenge. This year he’s starting another independent study at NMH, this time in biochemistry.

Spurred by this summer’s success, Ethan says he’s “looking forward to doing more research and getting some incredible results that could be published and even change the world. … I’m not asking for too much,” he says, grinning.— By Emily Weir

Photo of Ho (left) and Kaming-Thanassi by Glenn Minshall