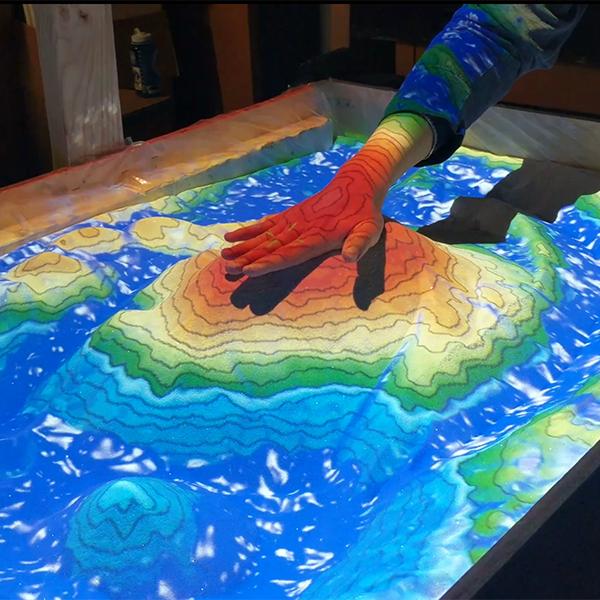 April 19, 2017 — The sun is shining outside, but inside Cutler Science Center, it’s raining. Virtually raining, that is.

Members of the NMH Science Club have worked all year to produce an “alternative reality sandbox” that appears to show a mountain on which it’s raining, with water running down its sides and pooling at its base.

Only it isn’t a mountain, it’s a pile of physical sand overlaid with a virtual topographic map. And when a student rearranges the sand or makes it “rain,” the computer-generated view changes accordingly. Virtual water is projected onto the sand’s surface, shimmering like actual liquid.

Science Club adviser David Warren says it works like this: When a student moves the sand, a depth sensor creates a depth map of the sand’s surface. Then a computer projects a matching topographic map onto the sand.

Using the alternative reality sandbox, students can visualize what different possible watersheds might look like. Another way to use the technology, Warren says, is to load terrain maps of real locations, such as NMH’s campus near the Connecticut River. Once the information is loaded, students can create “rain” in various places, by holding an outstretched hand over the virtual image, and see where the water would flow.

Students used software and plans developed by a UC-Davis project called SARndbox. Over the course of this academic year, NMH Science Club members gathered materials, put the mechanism together, and calibrated settings until the prototype worked.

Although it was built in NMH’s maker space just for fun, it could be used in courses such as AP Environmental Studies. It will also be available for students to play with in NMH’s science center. — By Emily Weir