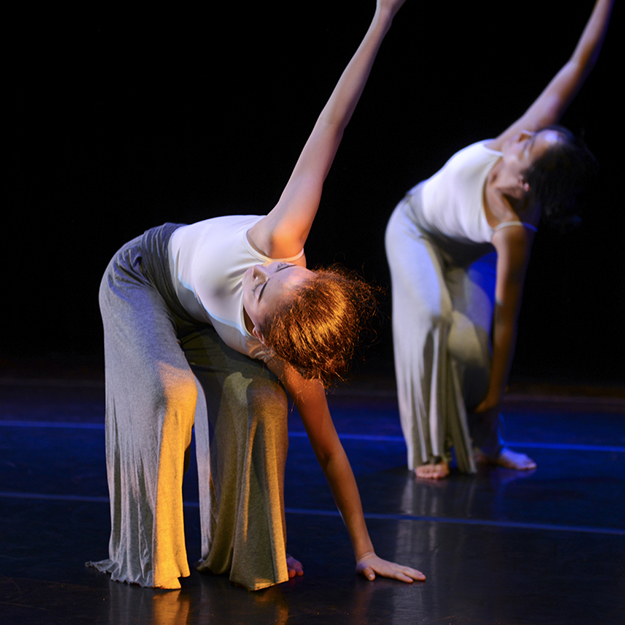 For NMH’s fall-term concert, which runs Oct. 26–28 in the Rhodes Arts Center, the junior dance company created a piece that’s a response to the violent white-nationalist rally in Charlottesville, Virginia, last August. Choreographed by new dance teacher Taylor King, the piece is accompanied by sound clips from the rally — including that shocking scream — and a 1965 version of the song “Strange Fruit,” which describes the lynching of African Americans in the early 1900s.

As they rehearsed for weeks, the 13 dancers grew accustomed to hearing the unsettling music, sung by Nina Simone. They found themselves putting aside the horror of what happened in Charlottesville — and the political and societal turmoil that followed — so they could concentrate on the technical aspects of the choreography.

“You can’t listen and dance to something so hard every day without taking some sort of mental break,” says dancer Naomi Christiansen ’18. Performing for an audience requires a nuanced approach. “We have to figure out a way to not feel it so we can get the job done,” she says, “but also to feel it because it’s so important.”

King introduced the project, titled “Backward,” to the dancers right after the school year began. She showed them the Vice News documentary video about the rally, “Charlottesville: Race and Terror,” which depicts white men marching with torches and chanting “White lives matter” and “Jews will not replace us.” Each dancer wrote about what they were thinking and feeling, and then improvised individual movements that matched some of their words. King built much of the choreography around those movements.

“It was important to start with them,” she says. “That’s how they become invested.”

At first, when the dancers watched the documentary, “there were a lot of intense emotions on their faces. Some of them were in tears,” King says. “I kind of broke down,” Ella Bathory-Peeler ’20 recalls. But after that, something shifted. Bathory-Peeler says she remembers thinking, ‘This is what art is for.”

The dancers, who range in age from 14 to 18, found that working on a piece so political in nature forced them to look inward as well as outward. It feels like “a big moment for us, developmentally, as artists,” says Adele Behar ’18, “because it’s one of the first times we’ve worked on something that conveys such strong meaning.”

At the same time, they were thinking about how audiences would react. Would people cry? Walk out? Their goal, they decided, was simply awareness. “Tackling a subject that’s this difficult forces the audience to look at what’s going on in the world and not to tiptoe around it,” says Megan Hrinda ’19. Maya Green ’20 added, “We just want people to start having conversations about it.”

“These students are feeling so empowered,” says Dance Program Director Gretel Schatz. “They’re figuring out what dance can be, as a form of expression, and they’re doing something we always try to do: process the world in the studio.”