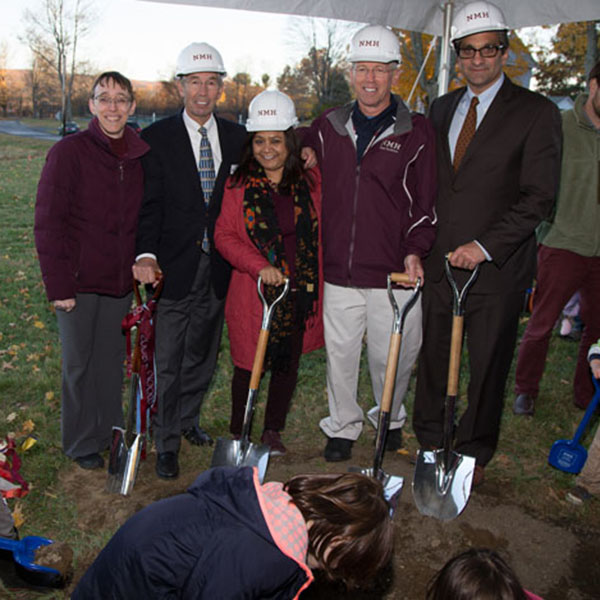 Nov. 1, 2015 — At least a dozen shovels bit into the dirt October 30 as NMH broke ground for a $1.8 million Early Childhood Education Center (ECEC).

Children with tiny blue shovels joined adult dignitaries for the official start of construction on the 5,630-square-foot campus facility.

Head of School Peter Fayroian, trustees Stephen S. Fuller ’58, P’98 and Sumita Ambasta P’14, P’18, and others spoke during a brief ceremony at the site. The ECEC will be built just south of the Lower Modular building, and is expected to be complete by fall 2016.

“The Early Childhood Education Center will reconnect our program with its roots in the NMH community,” says Carol Kennedy, director of the NMH’s nursery school. She will also be in charge of the new program. “The center will give us a fresh space in which we can continue to offer days filled with curiosity, exploration, and growth for many years to come.”

NMH has offered some kind of early childhood program since at least 1947, when such programs were comparatively rare at schools. A recent campus “baby boomlet” has made an expanded center essential.

“This beautiful new facility will ensure that the children of our faculty and staff are cared for in a loving and stimulating environment reflective of the environment their parents create for all NMH students,” says Fayroian, who held his 3-year-old daughter during the ceremony. “Access to high-quality child care is essential to attract and retain high-quality teachers with young children.”

The new space will have four classrooms, each tailored to the needs of a specific age group. Overall, the center will accommodate as many as 56 infants, toddlers, and preschoolers from NMH and local families. Seven full-time teachers and a certified preschool director will staff the center.

Kennedy says that moving from the current rented facility to the NMH campus will enrich the children’s experience in many ways. She envisions visits to the center by NMH student performing arts groups, having the teenage students read to the younger kids, and taking the children to the NMH farm.

Science teacher Jolene Schuster says she is excited at the prospect of having her son Joe on campus, and about opportunities for the younger kids to interact with NMH students. “It’s going to be a great thing for everybody,” she says.

“This building is a symbol of what we already know: that NMH is a great place to raise children,” says Pete Masteller, chair of the Religious Studies and Philosophy Department and father of a 9-month-old son.

Fuller, chair of the board of trustees, notes that this groundbreaking is just “the beginning of a major effort that will put this school in a good position for the next 50 years. You’ll see a lot of shovels over the next couple of years.”