Music and Memories with an A Cappella Legend 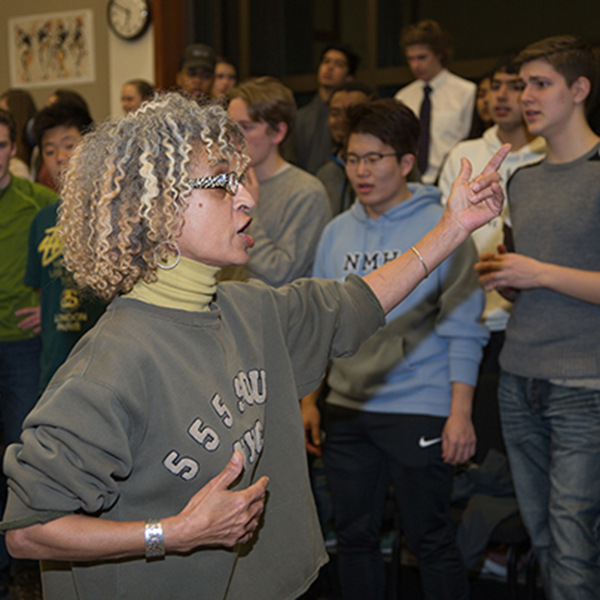 Feb. 9, 2016 — At a recent rehearsal of the NMH Concert Choir, Heffernon Hall swelled with rich harmony. No one held sheet music. The piano was silent. The singers intently watched the person leading them, adjusting their harmonies in response to a movement of her hand or even a tilt of her head. Clearly, these students had a good rapport with their director.

They’d been working with artist-in-residence Evelyn Harris, formerly of the a cappella ensemble Sweet Honey in the Rock, for all of 15 minutes.

Sheila Heffernon, NMH’s Performing Arts Department chair and director of choral music, sat among the students. She said this departure from the norm — getting to sing with the choir — was a joy. Harris took the helm for only two rehearsals, but in some ways, her residency had begun weeks earlier, when the choir learned “Wanting Memories” from the repertoire of Sweet Honey in the Rock, with which Harris performed for 18 years. Heffernon said, “We are focusing this winter term on singing music about memories, particularly of ancestors.” To prepare for working with Harris, the choir learned songs by rote and practiced harmonizing by ear.

The first rehearsal moved at a rapid pace, with Harris launching the choir into spirituals and anthems from the civil rights movement, one after another. Once each vocal section found its part in the harmony, Harris improvised a solo, dancing across the room and wowing the students with her vocal range. She got laughs of admiration and appreciation from the boys of the bass section when she dropped her voice well below their lowest note and encouraged them to attempt the same. Although Harris rarely stopped the singing to talk, she paused long enough to put the spirituals in context. She explained that the music was composed by slaves. “There is comfort in music when you are oppressed,” she said.

Both Harris and Heffernon hoped the students would begin to trust themselves and improvise more. Evidence of success came when Harris asked for a volunteer soloist and Naomi Christiansen ’18 jumped right into the challenge. Later, when Heffernon reflected on Harris’s visit, she said Harris “reminds me that music comes from inside the singer, from one's soul and heart. She also helped me recognize how wonderful and capable the Concert Choir is.”

As for the choir members, they responded to their first rehearsal with Harris by inviting their friends — singers and non-singers alike — to join them for the second. The packed rehearsal hall said it all. Students filled every seat, and NMH faculty and staff lined the perimeter of the room. Led by the enchanting Harris, everyone sang reggae selections together, proving Harris right when she said, “What feels good, what you hear, what you can repeat — makes good music.”