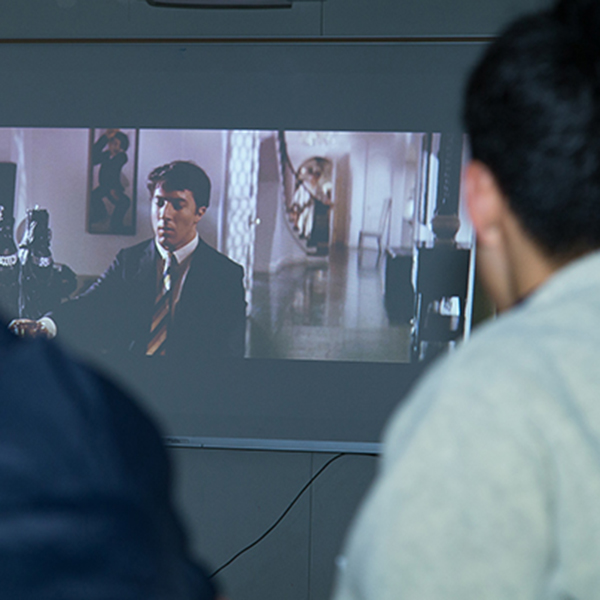 Dec. 16, 2016— The seven students in English teacher Richard Sell’s film class are sitting in the dark, their hands poised over brightly colored buzzers on the desktops. As today’s film —The Graduate — flickers on a screen before them, the noise level rises.

“Masking!” shouts one student, banging his palm on the buzzer. “Extreme close up!” says another. “Tracking shot!” several announce in unison. The class is playing a game to review for the final exam, spotting film techniques in the award-winning 1967 classic. The first person to identify a technique correctly gets a token, which might be taken by another who buzzes with the correct answer the next time that technique occurs. Insightful comments earn students butter cookies and praise from Sell.

As Benjamin, the title character played by Dustin Hoffman, ponders his future and awkwardly begins an affair with “Mrs. Robinson,” students are focused on the film’s construction, even when the original “cougar,” Mrs. Robinson, reveals racy-for-the-1960s lingerie.

Sell prompts, “Does Benjamin know what he wants in life? What does the swimming pool represent? Why is a closed frame used here?” And replies, from obvious to insightful, cascade back at him.

Most class sessions aren’t this raucous, but do require a similarly observant and analytical approach. “I want students to see how film shapes our perspective on the world,” says Sell. “I hope they will acquire a vocabulary to describe how film works, learn to analyze and write about film, and apply that critical eye to all the films they see.”

That’s happened for Ilya Hora ’17. “I have learned how to analyze films more deeply than just their superficial aspects,” she says. “My arguing and writing skills have improved. I have learned about different film genres, film history, and how to review films. I feel like a film nerd after having taken this class, but I love it!”

The class considered film-school standards such as Persona, The Great Dictator, and Citizen Kane; contemporary dramas including Children of Men and American Beauty; and European art fare such as Caché. Students take notes while watching each film, then expand their ideas in analytical essays.

Sell, who holds degrees in media/film studies and literature from American and German universities, also takes his students out of the screening room. They saw Arrival at a nearby cinema and then reviewed it. Another day they took photos around campus to illustrate film terms such as “low-angle medium shot.”

“I want them to step back and look at movies from a different perspective,” says Sell. “Then I hope they’ll carry those ideas to the rest of their lives.”

Aspiring filmmaker Jackson Spindle ’17 is already doing so. He previously had a strong interest in films, but says before this course “it was less common for me to watch individual scenes while considering the lighting, cinematography, sound, dialogue, and other film techniques used.” The class has enhanced his interest in cinema, and “helped me think critically about how I want to make my own films.” — By Emily Weir