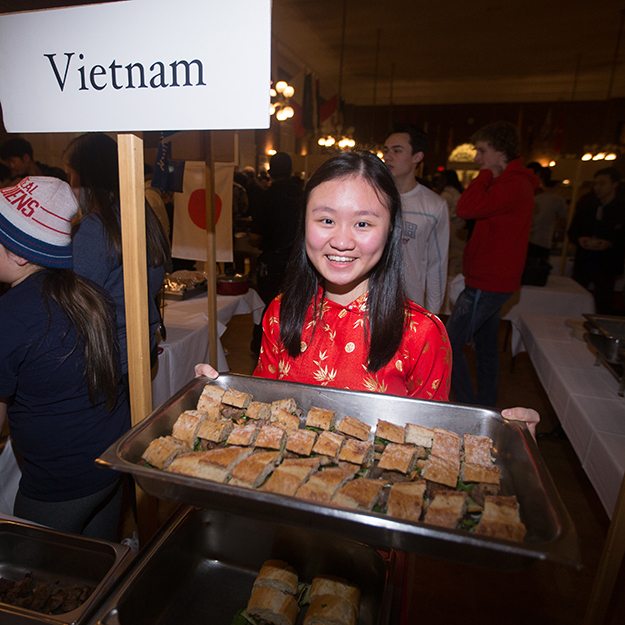 Jan. 22, 2018 — When NMH throws its annual International Carnival on a Saturday night in January, everyone comes prepared to eat — a lot.

The carnival is one of the final events in a week focused on Martin Luther King Jr. and issues of diversity, and it’s when NMH’s international students head into kitchens across campus, cook dishes from their home countries, and serve them for dinner in Alumni Hall. This year, the menu included — among many other options — Chinese jiaozi (dumplings) and noodles, Vietnamese banh mi, Hispanic empanadas, Indian samosas, West Indian beans and rice, Kazakh meat pies, Dutch chicken croquettes, Arabic flatbread filled with za’atar spice, and Taiwanese bubble tea.

“It’s wonderful to see it all come together,” said Angela Yang-Handy, NMH’s dean of global, experiential, and community engagement, whose office oversees International Carnival. “These students have been planning for months. They get very excited to show everyone where they’re from.”

Before the Alumni Hall doors opened to diners, Carrie Kim ’18, Seho Myung ’18, and Kevin Kim ’20 were in the kitchen, stirring Korean rice cakes and fish cakes into a spicy red pepper sauce for a dish called tteok bokki. Their group also had made rice balls — jumeok bap. “These are common street foods in Korea,” explained Janice Cho ’21. “The rice balls are a classic snack, like what you’d eat after school,” added Celes Moon ’21. “My grandmother used to make them,” Cho said.

Earlier in the day, Tian Shi ’18, who grew up in Australia, was working in a dorm kitchen, separating 40 eggs for the pavlova. “It’s a traditional summer dessert that we used to enjoy as kids at celebrations and neighborhood gatherings,” she said. Shi handed the egg whites off to two varsity basketball players she’d recruited as sous chefs. Armed with copious amounts of sugar and electric mixers that Shi had borrowed from faculty, the two very tall boys whipped up clouds of fluffy meringue. Shi, who has made the pavlova for International Carnival every year since she was a ninth grader, kept a close eye on them.

Back in Alumni Hall, the throng of students and teachers listened to music by the NMH World Music Percussion Ensemble and, plate by plate, grew sated. English department chair John Corrigan declared the pavlova one of the best desserts he’d ever eaten, while students at a nearby table favored the brigadeiros, and the pastelitos de guayaba — pastries made by the Hispanic-American student group.

By 6:45, the crowds had thinned. Clean-up began. NMH Dining Services staff members, who had surrendered their work spaces to student groups for the afternoon, patiently waited to take back the kitchen.