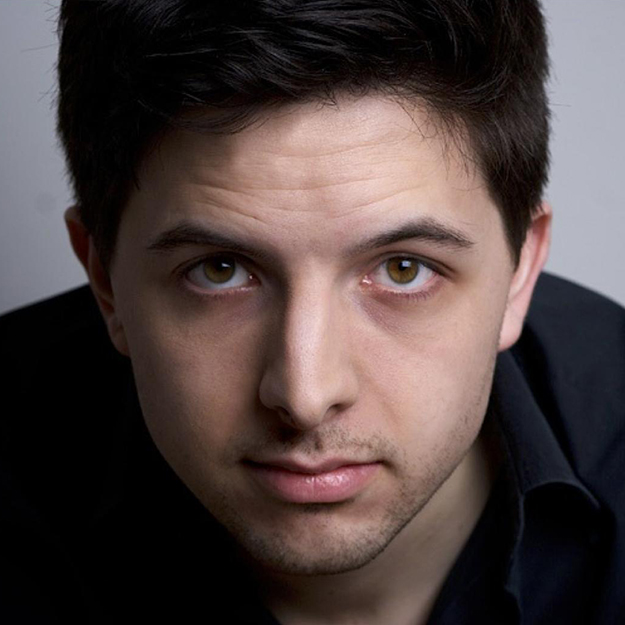 Sept. 18, 2019 — Writing is solitary and interior. Teaching is collaborative and public. But Jared Eberlein — a playwright and director of theater programs at NMH — finds that each role enhances the other.

Eberlein had a big month in August, when two plays he wrote premiered. Click! (A Travel Motif) was one of 30 plays chosen from more than 850 submissions for the Samuel French Off-Off-Broadway Play Festival in New York City. And his newest composition, I'll String Along with You, had a workshop production at New World Theater in New Hampshire. He was one of seven playwriting fellows there.

Watching as both plays developed from page to stage made Eberlein a student again. He’s now applying insights from that experience to teaching his NMH playwriting course.

“I tell students that, while I may have written more plays than they have, we all start not only with that horrible first blank page but also with a wealth of human experience,” he says. “The convergence of those things is where every play comes from.”

He’s been in that place of excited confusion where student writers often begin (and where all writers often dwell.) Collaboration helps. “We work together to unlock the story that each student wants to tell,” Eberlein says. Some haven’t written anything; some are poets or have journaled for years but are new to writing dialogue; all work hard to put their vision on paper.

“The struggles are individual, but we come at them from a collective point of view,” Eberlein says. Trust is crucial as students share their work with others and receive feedback from the group. Eberlein’s experience having his own plays critiqued helps him show students how to “distill the nuggets of truth” that could improve a play and ignore unhelpful feedback. “It’s amazing watching students go through this process, especially since I’m going through it with my own plays,” Eberlein says.

Working with other summer playwriting fellows, and with those staging Click in New York, taught Eberlein lessons he’s already used at NMH this fall.

Watching the director of Click work so effectively with actors “was a master class in communication for me,” Eberlein says. “The clarity with which he spoke to his actors has affected how I’ve taught even in these first few weeks of class. And working with artists this summer reminded me that, while students need focus and discipline, they also need space to breathe. If we’re just jamming theory after theory down their throats, they won’t be able to express themselves any better than when they started the class.”

At the core, Eberlein says, playwriting taps into what makes each person unique. That holds true for the NMH theater program in general. “As paradoxical as this is, I hope the theater program is a place where anybody can come and not have to pretend,” he says, “and in so doing, have a ball pretending to be anything they want to be.” — By Emily Weir