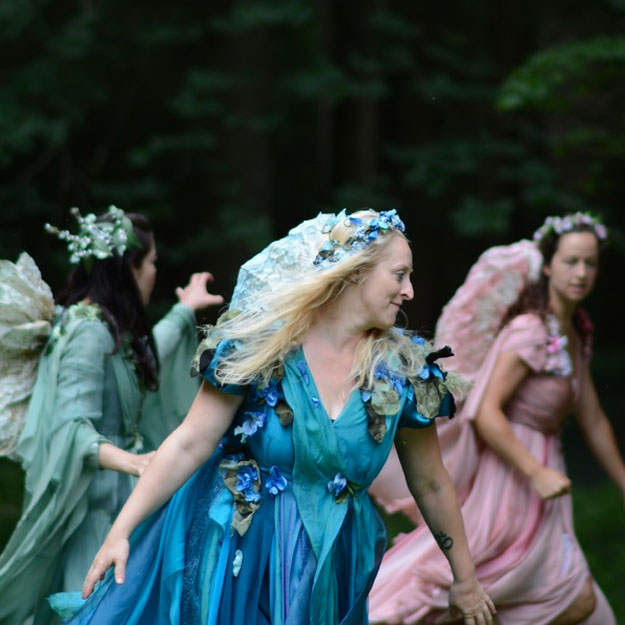 Feb. 13, 2018 — Theater workshops have a lot in common with sports practices, according to actors from the Lenox, Massachusetts-based Shakespeare & Company. Each winter, the company sends a troupe of actor-educators to NMH and other schools throughout New England to perform an abridged version of a classic Shakespearean play and offer a pre-performance workshop to students.

This year’s play was A Midsummer Night’s Dream, and on a recent Friday afternoon, NMH’s would-be Titanias, Oberons, and Pucks gathered on the Chiles Theater stage in the Rhodes Arts Center. “What do you guys do before a sports practice or a game? You warm up, right?” asked one of the Shakespeare & Co. actors. The 15 students and five professionals formed a big circle and launched into a series of breathing and movement exercises. “You’re a tree!” exhorted one of the actors as the group stretched arms and legs. “Now, shake your face out!”

Most NMH students read at least one Shakespeare play at some point in their high school career, whether it’s in ninth-grade Humanities, sophomore World Literature, or an all-Shakespeare-all-the-time senior elective. English teacher Meg Donnelly required her 9th-grade students to attend this year’s evening performance of A Midsummer Night’s Dream, and reported that they “loved” the performance and “couldn't stop talking about it in class. Now they want to read the play, which we begin next week.”

Back at the workshop, the students were divided into “clans,” each with their own signature war cry. “We’re surrounded by mists and cliffs and water raging against the rocks,” one of the Shakespeare & Co. leaders roared. “It is time for battle!” Lots of shouting, stomping, wild gesturing, and giggling ensued. Members of the audience — Donnelly and a few other teachers — grinned from their seats. It’s “all about bringing Shakespeare’s language off the page and giving it life,” she said.

Next up: a raucous lesson in how to present a scene with only a few minutes of rehearsal. The students, in groups again, chose roles and practiced lines with guidance from the professional actors. “What’s the most despair you’ve ever felt in your life?” prodded one leader who was trying to get her group to find their motivation for Act V, Scene 1, a dramatic death scene: “Asleep, my love? What, dead, my dove?” “Your lily-white lips, your cherry-red nose, gone, gone forever!” The scene ended with everyone collapsing onto the floor.

As the workshop wound down and the NMH students took their bows, one of the Shakespeare & Co. actors asked, “What was that like for you guys?”

“I liked putting emotion into it instead of just reading the words on a piece of paper,” said Mathilda Haddock ’20, who’s a regular participant in NMH theater. “Twas fun.”