From the Fast Ice of McCollum to an NCAA Championship 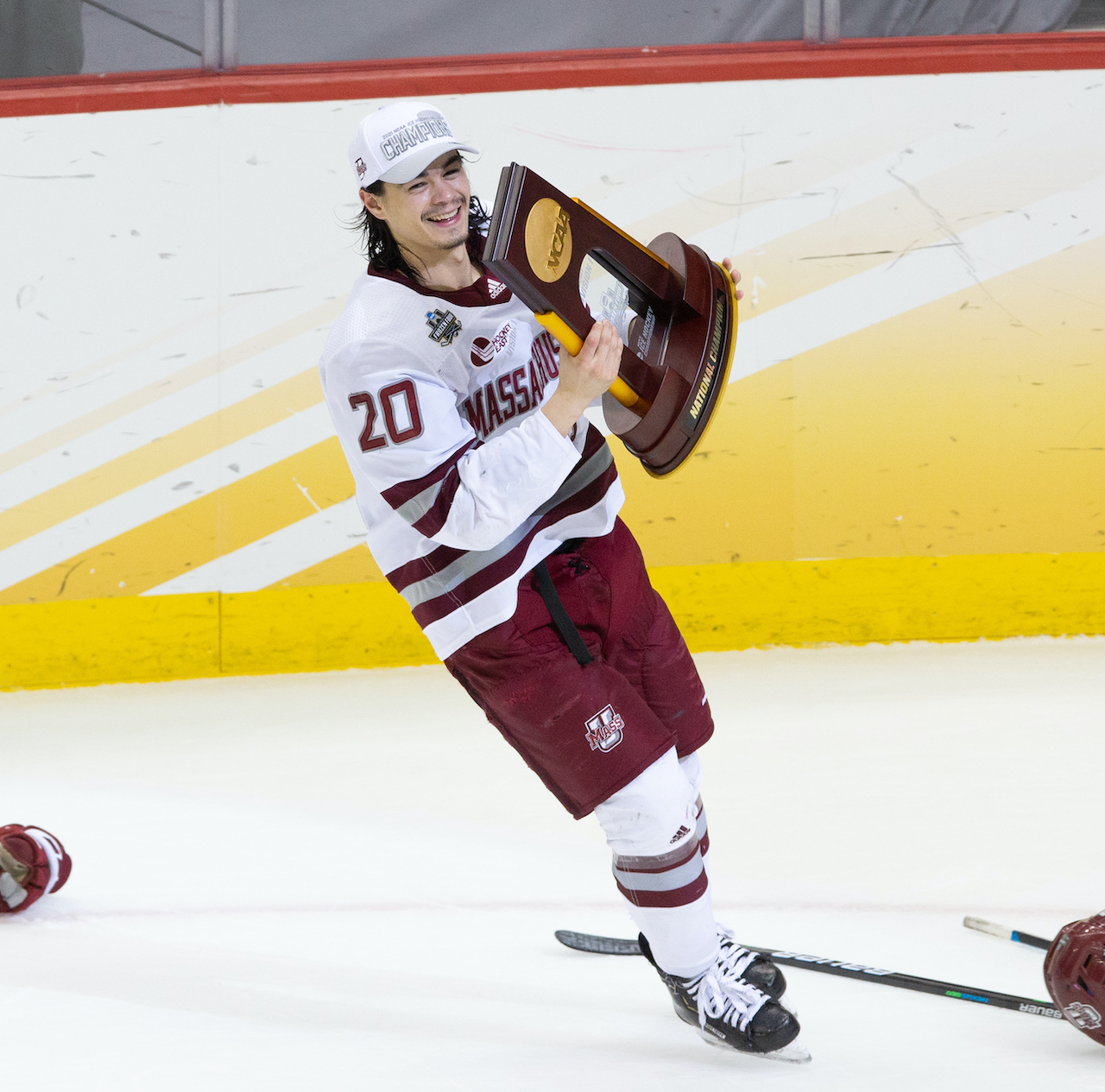 Chau’s team, the University of Massachusetts-Amherst, defeated St. Cloud State of Minnesota with a score of 5–0, earning UMass its first national title in the history of the school’s hockey program. Just four years ago, the school was ranked close to the bottom in D1 hockey, winning only five games out of 36. Chau, a forward, joined the team in 2017 — part of a plan to turn it around, and this year, despite the pandemic’s crippling effect on college sports, he and his teammates triumphed. “It's such a surreal feeling,” he said the week after the championship game. “It really makes all the hard work you put in over the years worth it in the end. Even now, I can't really believe it.”

Chau, who’s from Toronto, Canada, plans to play a fifth year in the NCAA at Quinnipiac University, where he’ll also start business school. His success on the ice holds some irony, according to NMH hockey coach Kevin Czepiel ’07, because during Chau’s senior year at NMH, he almost quit hockey. “He had some serious concussion issues and couldn’t practice for months,” Czepiel said. When Chau did get back on the ice, he tore the labrum in his shoulder. Surgery followed, but his senior-year season was over. “It felt like I was at a crossroads in my life,” he said. “Did I want to hang it up or continue playing?”

He went for it: rehabbed the shoulder, played for a year with the Brooks Bandits, a junior hockey team in Alberta — where he was named the league’s “Rookie of the Year” — and ended up at UMass.

“It was such a pivotal moment in my life,” he said, recalling his senior year at NMH. “I knew if I had quit, I would have regretted it for the rest of my life. I would have lived with all the what-ifs. Now, with every decision I make, I go back to that moment and ask myself the same questions. Will I regret this decision? Or is this something I really want to do?”

When Chau landed at UMass, the expectations were clear. “The coaches told us, ‘This is going to be the class that changes it all.’” A few of his fellow players got signed in the NHL after sophomore year, a few more the year after that. By his senior year, Chau said, “The rest of us were calling ourselves the Misfits because we're still here.” But this fourth year, he added, has been “storybook, to be honest.”

Two years ago, the team made it to its first national championship game, but lost to the University of Minnesota-Duluth. The pandemic cut last year’s season short, and then made this year’s unpredictable. But the team managed to play 29 games (20-5-4) with only one player contracting COVID-19. And making it to the last round of the “Frozen Four” this year was different than 2019. “The first time, we were just happy to be there. This time around, everyone was excited, but we were also laser-focused. We were confident we were going to win this thing, finish the job.”

Among the fans watching Chau’s ascent at UMass have been NMH’s hockey players. Czepiel — who captained the UMass hockey team eight years ago — said, “It’s definitely a point of pride for them to see Oliver’s success — someone who played in the same rink and used the same locker room as them. He was a bright spot during an extremely tough year.”

And that rink, McCollum Arena — which is about to undergo renovations this summer, including the construction of actual walls — is one of the things Chau loved about NMH. “The ice was unbelievable, so fast, so hard — and no one could handle it but us,” he said. “Other teams would come in and complain, but we embraced it. It was part of our identity, I guess — our grit.”