COVID-19 Vaccines — in the News and in Biology Class 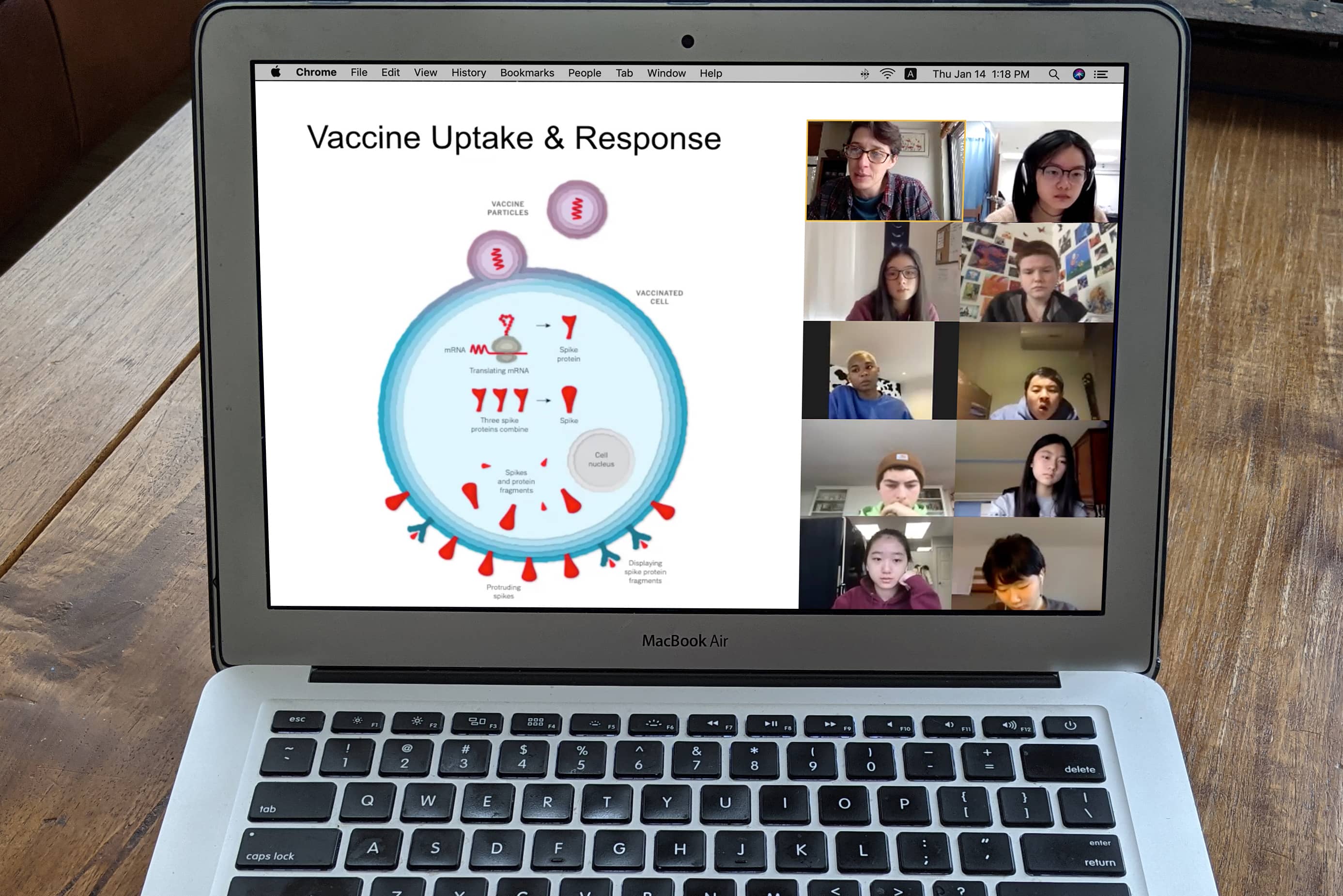 Jan. 14, 2020 — Students in Jolene Schuster’s Honors Biology class jumped back into the winter term this week with a discussion of one of the most urgent scientific topics facing the world today: vaccines for the virus that causes Covid-19.

Over the break, Schuster had asked her students to read a New York Times article on the Pfizer-BioNTech vaccine and respond to questions about how it works. “It’s incredible how fast the science is going with this — it’s unprecedented,” she marveled as she welcomed the students on Zoom. (Classes are taking place remotely for several weeks before in-person learning starts up again in early February.) “Not only have these vaccines been developed faster than any others in our history, they also employ new technology that promises to increase safety and efficacy over traditional vaccines,” Schuster had written in the assignment.

In class, she explained that viruses like SARS-CoV-2 are not living things. “They’re like parasites,” she said. “They cannot reproduce without a host. They hijack a plant or animal or fungus, and they make copies of themselves.” But the human immune system, she went on, can learn to recognize and target virus particles. That’s what the vaccine is for.

Schuster shared her Zoom screen with the class, displaying the now-familiar image of a SARS-CoV-2 particle covered with little red appendages. Those appendages are called spike proteins, and they “trick human cells into taking them in,” Schuster explained. The protein-making machinery in our cells manufacture components of the viral particle, which then assemble into new copies of the virus that go out and infect other cells.

The new vaccines, developed with a small segment of synthetic genetic material, create a defense against this infection. The Pfizer-BioNTech vaccine that the class was discussing sends messenger RNA (mRNA) into human cells, prompting those cells to build their own spike proteins that, in turn, stimulate production of antibodies that fight back against intruders. The mRNA in the vaccines does not include “all the other stuff that tells the virus how to reproduce itself and infect human cells,” Schuster said. “It only contains the information the body needs to make the spike protein, which by itself can’t hurt you.”

“Will the vaccines work on the new variations of the virus?” asked one student. Yes, Schuster said; the variations are only “small mutations in the virus’s RNA,” which means the antibodies people produce after getting the vaccine should still recognize the variants. “But evolution is a lot smarter than humans,” Schuster clarified. “And it happens really fast, especially with something like SARS-CoV-2 that can pass from one type of host to another.”

After class, another student, Athena ’23, commented, “There are so many things involved with these vaccines, like people’s religious beliefs, their educational background, and social justice and power dynamics. So it was meaningful to talk about the science — to understand how they work and why they work. The question a lot of people are asking is, ‘How do we know they are really safe?’ It’s not that I don’t believe in vaccination. It’s new, so there are still a lot of concerns about it. The key point is for the medical companies and the government to give us accurate information.”

Schuster was understanding but sanguine. “Anytime you’re injecting a foreign body into yourself, there’s potential for infection or a reaction,” she said. “And with new technology, you don’t know the long-term effect. But I am super-confident, and I will take the vaccination the first chance I get.”

The illustration depicted on the laptop screen is from a New York Times article by Jonathan Corum and Carl Zimmer.