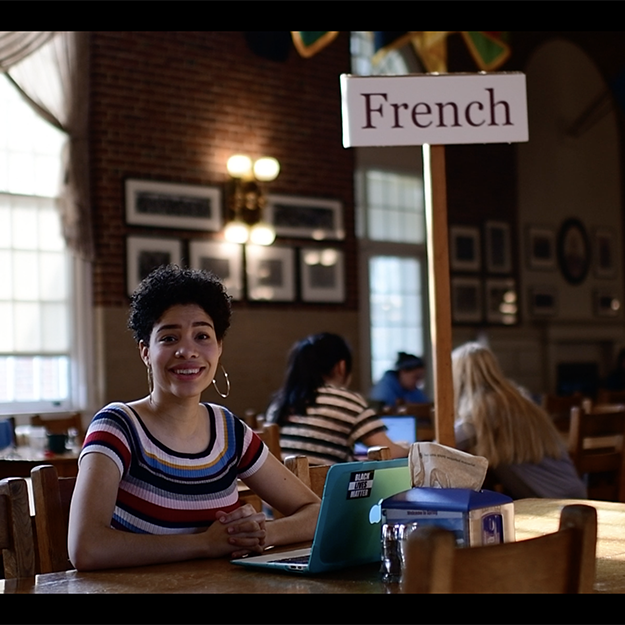 April 29, 2016 — If you looked up from your bowl of cereal in Alumni Hall one morning in mid-April, you might have seen a French-speaking film crew merrily working their way through the dining hall, gathering footage for a satirical video about NMH, and cracking themselves up in the process.

Armed with a camera, a script displayed on a laptop, and a phone for recording audio, the crew members were all NMH seniors and juniors collaborating on a homework assignment for French VI — Contemporary French and Francophone Culture.

These are the most advanced French-language students at NMH, says their teacher Andrea Sell, and the class “is taught more like a literature or humanities course than a traditional language class.” The students read a novel in French, watch films, and talk and write about the role of French-language culture in the world, covering ideas such as class, education, and the roles of women, Sell says. For a unit on humor and satire, she adds, they delve into “what’s universal about humor, and what’s cultural.”

French satire dates back to the Enlightenment era, when the Catholic Church was the main target. Fast forward a few hundred years, and you’ve got Sell’s students taking their cue from iconic American comedy shows like “Saturday Night Live” and “The Daily Show,” and their French equivalents, “Le Petit Journal” and “Les Guignols.” Sell knew the students’ satirical-video assignment would be a challenge. “The ability to express humor is one of the last things you get when you’re learning another language,” she says.

Some of the students were intimidated. “I’m not funny in English,” says Marleyna George ’19. “How was I going to be funny in French?” Roxy Chopin ’18 agreed: “Yeah, I panicked.”

But the class texted ideas back and forth and wrote a script the next day in class. They settled on a mock tour of NMH as their subject matter — aimed at make-believe, newly accepted students — because NMH is “the one thing we all have in common,” George says. Their “scenes” sent up NMH’s Meatless Monday initiative, study-abroad programs, and world-language-conversation tables in the dining hall, among other topics. “I was worried that we’d poke fun at something we’re not supposed to poke fun at,” says Eve Mansfield ’18. “We had to figure out that line of satire — how far you can go.”

The students maintain that they couldn’t have pulled off the project when they were younger. Their language skills would have been less proficient, for one thing, and Heidi Leeds ’18 says their collaboration would have been rockier. “We’d have been more shy and nervous, which would have made it harder to work together.”

In the end, Sell says, her goal was for the students to work independently, and “strengthen skills in French across the board” while also considering the nuances of humor and how it is perceived by audiences. The video turned out to be a prime example of cultural humor, because, as Mansfield says, “We all recognized the same things that are funny about NMH.”

“We have this idea that something is either funny or it’s not,” Sell says. “Watching someone fall down on the ice is universal. But if we look at stand-up comedy and satire, it’s often cultural. It’s funny because you know the backstory.”