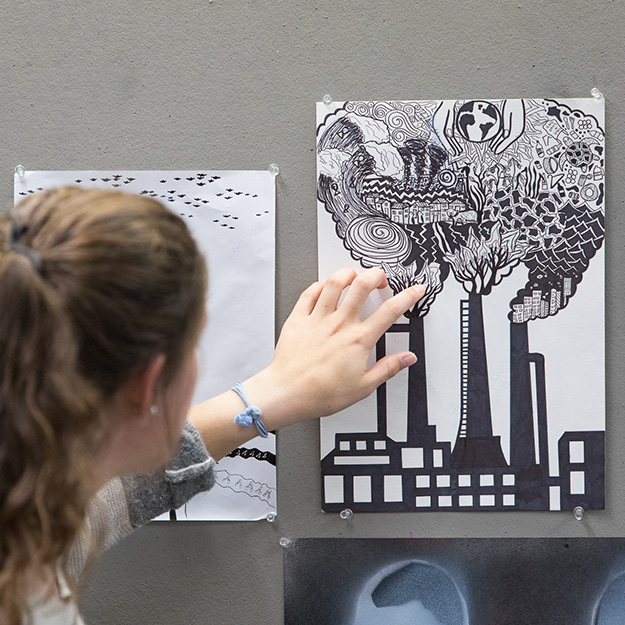 That’s what art teacher Lauren Scott Corwin asked students in her AP Two-Dimensional Design class as she introduced a “protest art” assignment in mid-October. Create a piece of artwork focused on a social movement, she said; go in any direction you choose as long the work includes at least two different media and demonstrates basic artistic principles such as symmetry, balance, and emphasis. “This is your chance to challenge the status quo,” Corwin said. “This could be fun. It could also be a little bit terrifying.”

The students dug right in. “Art and political protest go hand in hand, in my point of view,” said Hugh Schatz-Allison ’19. “Art can be political even if it’s not protesting something.”

But protest art, specifically, has a long history, Corwin explained. There’s Picasso’s famous anti-war mural “Guernica,” which Corwin showed the students; and works by the Guerilla Girls, an anonymous feminist artist collective whose work includes a lithograph that calls out the Metropolitan Museum of Art’s unbalanced ratio of female artists to nude female portraits by posing the question “Do Women Have To Be Naked to Get Into the Met. Museum?”

Corwin developed the protest art assignment last summer, as she responded to current events through her own artwork. She painted oil portraits of people she felt needed to be heard, such as Therese Okoumou, the woman who tried to climb the Statue of Liberty to protest U.S. immigration policies; and Anita Hill, the law professor who returned to public attention during the U.S. Supreme Court confirmation hearings for Brett Kavanaugh. Corwin showed the class these and other portraits she’d made, pointing out that the students would be expressing views that were equally personal. “I don’t need to agree with you,” she said. “This is about design elements and principles and craftsmanship.”

Over the course of two weeks, the students tackled topics including climate change, police brutality, war, immigration, abortion, the #MeToo movement, gun violence, and smartphone-induced social alienation. They made acrylic paintings, pen and ink drawings, collages, graffiti art, and digitally designed posters. “It was the first conceptually driven piece we’ve done, so it was a risk, letting them branch off any way they wanted,” Corwin said. “But there was also trust, because they really cared about what they were making. With art, there are always different ways to solve a problem, especially when there’s such an emotional, personal background to it.”

That’s exactly what the students seemed to appreciate most. When they gathered for a critique, Marleyna George ’19 said, “I really liked this project because everyone is doing something that’s so different from everyone else.”

Stephen Peng ’20, who worked with spray paint — and who climbed into a dumpster at the farm to find just the right piece of cardboard to work with — said he liked being able to try a new medium. “I’ve been a fan of street art for a long time, all those anonymous artists who express their ideas through their art,” he said. “In other projects for this class, we’re always expressing ourselves, but for this project, we got to say, ‘Hey, class, these are my ideas. This is what I believe in.’”