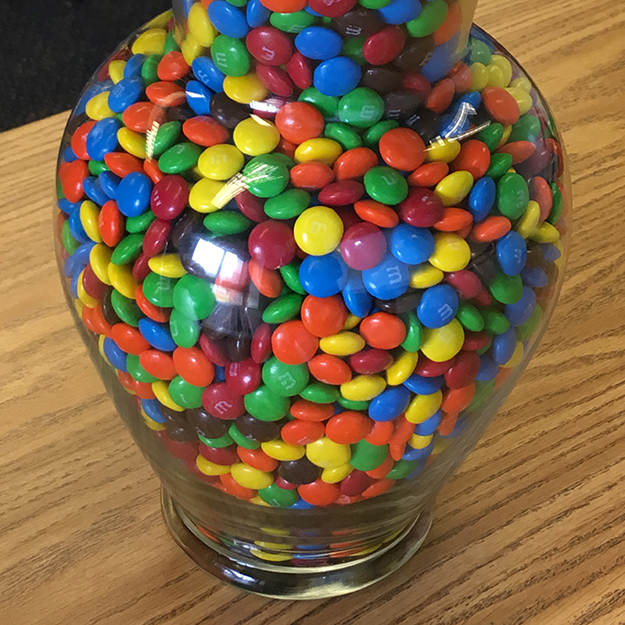 May 25, 2018 — How many M&Ms are in the vase? Math teacher Will Reid posed the question to his AP Calculus students during the last week of class, and in turn, they invited the rest of the NMH community to chime in with guesses. But they themselves were definitely not guessing.

“Integration is the tool they’re using to figure out the volume and answer the question,” Reid said, after introducing the project. “They’ve already learned this technique, and practiced it, but never with an actual solid object that’s here in the room. It’s always been me describing some scenario and they have to visualize it and figure out what the volume would be.”

The large, curved glass vase, packed to the brim with M&Ms, sat on Reid’s desk as students opened their laptops and began. A few approached the vase with a ruler, while others stayed with their laptops. “The goal is to establish a bunch of functions,” Reid explained. “You’re modeling the exterior of the vase. Then you’re going to integrate. What would the cross sections look like?”

Two classes — 32 students altogether — spent a couple of class periods working on the problem. Essentially, they wrote equations that represented the side of the vase, then created a graph, which they then visualized as a 3D object rotating around an axis. Once they established the volume of the vase, they used research on the “packing density” of M&Ms done by students at the University of Delaware to calculate the quantity of candy, according to Tayhee Lee ’19, one of Reid’s students, who explained the project via email as he announced the winner.

In the end, one of the calculus students, Adrian Eastmond ’18, proffered the closest estimate of 3,360 M&Ms, which was only 12 off the actual number in the vase: 3,372. As the winner, he got to claim the entire jar of candy. More than 110 community members submitted guesses, but of the top 10 estimates, eight came from calculus students. “Taken as an average, the method works — that’s my takeaway,” Reid said.

Kyle Huang ’19, another student in the class, was equally practical. “Who says math has no applications in real-life scenarios?” he said.