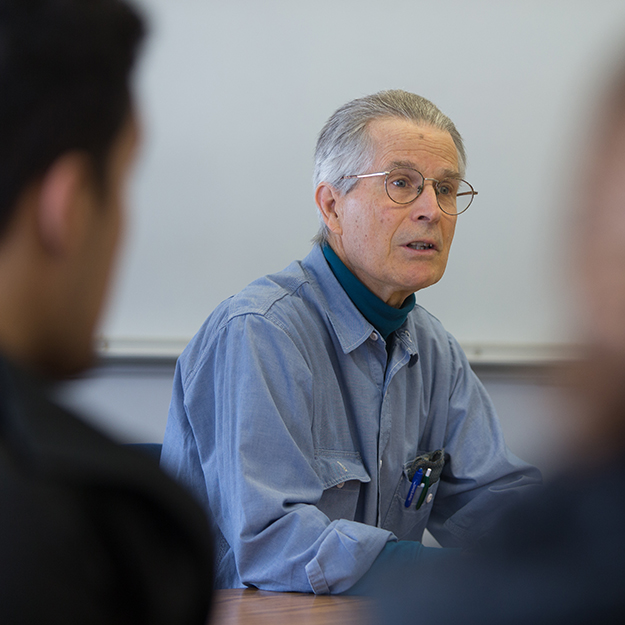 Feb. 19, 2018 — What do you do when a visitor shows up in your history class, and he happens to be the guy who inspired the military analyst Daniel Ellsberg to become one of the 20th century’s most important whistleblowers?

You ask questions, that’s what.

In 1971, Ellsberg leaked thousands of pages of classified U.S. government documents about the Vietnam War to The New York Times, launching the downfall of President Richard Nixon’s corrupt administration. Ellsberg took action after hearing the activist Randy Kehler speak at a War Resisters International conference in 1969. Kehler had just been charged with a federal crime for returning his U.S. Selective Service draft card and refusing to join the military, and he spoke at the conference right before he began a two-year prison sentence.

Kehler is the guy who showed up in history teacher Jim Shea’s Government and Civil Liberties class on a recent Friday morning. He lives in Colrain, Massachusetts, not far from NMH, and has been a regular speaker in Shea’s class over the years.

“We do a unit on civil disobedience and what it means to be a citizen in a democracy,” Shea said. “We talk about what your responsibilities are, not only to your country and your community, but also to yourself as an individual. What do you do if your government enacts a policy that goes against your own morals?”

The students read works by Plato, Henry David Thoreau, and historian Howard Zinn, and watch An Act of Conscience, a documentary film about Kehler’s anti-war activism, which eventually led to the IRS seizure of his home after Kehler and his wife refused to pay federal taxes that would support the U.S. military.

“We always pay our local and state taxes,” Kehler explained to Shea’s students. “We believe in giving money away to people who truly need it.”

“Do you think having a military is necessary?” one of Shea’s students asked. “I don’t believe there is anything wrong with having highly trained, organized groups that are capable of going into dangerous situations to help people,” Kehler said. “I like what the National Guard does — saving lives in emergencies. That takes discipline and courage. But armies as we know them today are training people to kill.”

Another student asked, “Is there such a thing as a war you could support?” “Unless there’s an invasion [of the U.S.], absolutely not,” Kehler answered. “We’ve created our own enemies.”

Another question: “What do you think would happen if everyone did what you did?” The student was referring to Kehler’s decisions to both resist the draft and refuse to pay federal taxes. “It would take a relatively small number of people doing that to make policies change,” Kehler replied. He added that many people do not speak up despite having strong opinions, because they’ve accrued too much — money, possessions, professional reputations — that they are afraid of losing. “Those things can prevent you from acting on your conscience,” Kehler said. “But silence is complicity. Don’t get locked in to a point that you can’t do what you think is right.”

A final question: “What about our democracy needs fixing?” a student asked.

“That’s a good one,” Kehler said, and he turned it back to Shea’s students. “What do you think?”