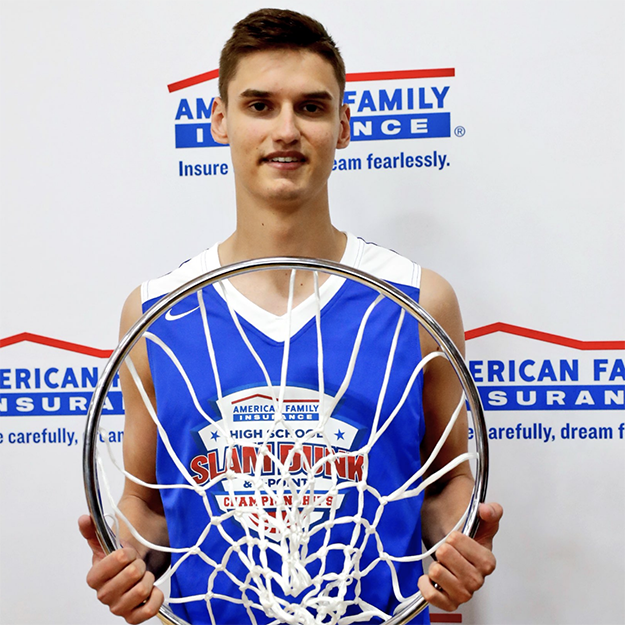 NMH’s winter basketball season is over. The post-season is over, too. But Nate Laszewski ’18 hasn’t finished winning. Earlier this week, he won the national three-point shot contest. You can watch Laszewski outperform seven of the nation’s best three-point shooters on Sunday, April 1, at 3:30 pm EST when CBS broadcasts the U.S. Marines Three-Point Championship. The live event was March 26 in San Antonio, Texas.

The shootout championship — now in its eighth year — showcases eight participants invited based on their statistics and/or reputation. This is the first time an NMH player was invited to compete. Head coach John Carroll practiced with Laszewski to help him prepare. “Laszewski is one of the best shooters in the country,” Carroll said. “And as an individual player, he’s had the most accomplished season this year in NMH history.”

Laszewski admits to having been “a little nervous” facing the tough competition, but added, “I’d practiced shots with JC [Carroll] so I felt pretty confident going in.” Carroll believed Laszewski could win, and he wasn’t disappointed. “The show he put on [at the championship] was insane,” Carroll said. Laszewski says, “Winning was an exciting moment for me, and my dad was there, which was pretty awesome.”

Laszewski led NMH’s boys’ varsity basketball team to a record-breaking season of 31 wins, and broke school records for the most points made in a season (685), most three-pointers made in a season (132), and most three-pointers made in a career (265). He earned All-NEPSAC AAA first-team honors. He was named MVP of the 2016 and 2018 New England (NEPSAC AAA) Championship tournaments. He was one of only two NMH players to play in every game this season and averaged 19.6 points, 6.8 rebounds, and 1.9 assists per game. By season’s end, Laszewski was NMH’s third-highest basketball career scorer ever, with 1,219 points.

Despite his standout status on the court, Laszewski remains humble. “Being able to play with so many great guys here and being able to win at the level that we have is an amazing experience,” he says. “It’s hard to describe what it’s meant to me in my life.” What he loves about NMH basketball is simply “being out there with friends, doing something I love and making special moments.”

The 6’10” center from Jupiter, Florida, is committed to attend Notre Dame after NMH graduation.