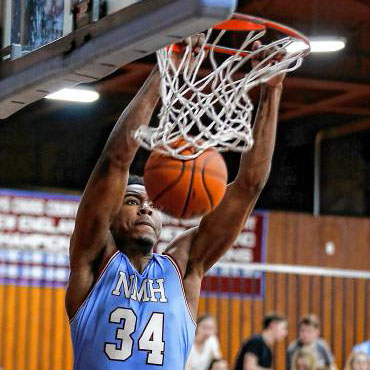 April 2, 2020 — “It’s not just about becoming a champion here at NMH, but a champion for life.”
So says Spike Albrecht ’12, assistant coach for the boys’ varsity basketball team, in the opening scenes of a three-part video series by Overtime, the New York City-based sports network, that recognizes the team as the best academic and basketball program in the country.
Overtime filmmakers spent a week on campus this winter, documenting the everyday lives of team members — classes, games, practices, even meals in the dining hall.
The videos were distributed through Overtime’s YouTube, Instagram, Twitter, and Facebook channels and had more than a million viewers per episode. Overtime partnered with Under Armour, which sponsors NMH basketball, to create the series.
The NMH team, which Overtime called “the basketball factory for the Ivy League” and “the smartest team in the country,” finished its 2019–20 season ranked fifth in the country — the 11th straight year NMH has been ranked in the top five in a season.
The team racked up more than 28 wins for the fifth season in a row, made its eighth trip to the National Prep Championship Final Four, and its 11th consecutive trip to the National Championship tournament.
Players Avery Brown ’22, Luca Lukacevic ’20, and Prince Moses ’20 tied the NMH basketball record for most games played in a season, with 38. Darius Ervin ’20 passed the 1,000-point career mark and tied the record for most wins in a career, with 121 wins. Moses, Ervin, and Ben Callahan-Gold ’20 were named McDonald’s All-American nominees.
The basketball team played in the Bahamas and Canada this season in addition to the U.S. The team was invited to play in the national Gatorade High School Game hosted by Bleacher Report, which took place on the elevated transparent  “Crystal Court” in Chicago  during the NBA’s All-Star weekend.