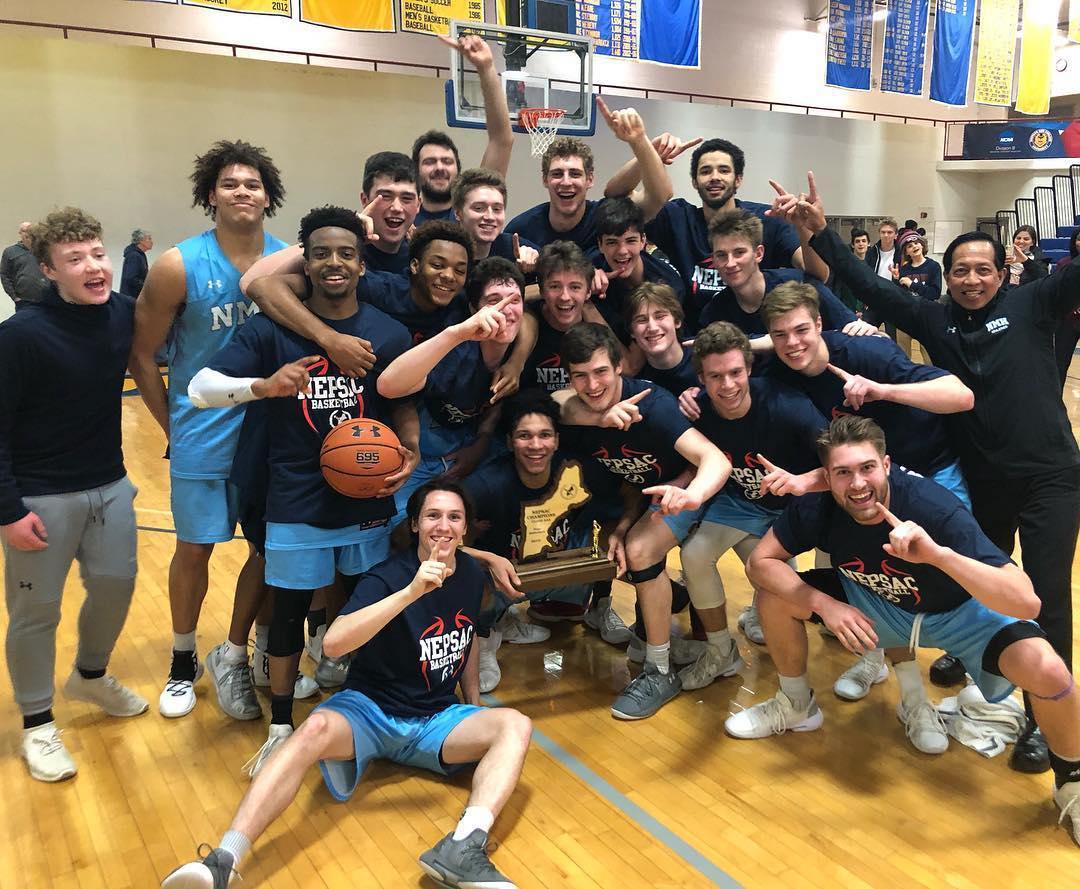 NMH, the defending New England champions and the #1 seed, faced off against #2 seed Brewster Academy at Western New England University for the 2019 NEPSAC AAA Championship.

NMH got out first with a 5-0 lead. Brewster responded, took the lead, and played with a lead for the most of the first half. Brewster had the hot hand, shooting 9-14 from 3, led by sophomore Terrance Clarke's 22 first-half points. NMH closed the gap heading into halftime, thanks to a Chris Ledlum ’19 three-pointer. Harvard commit Ledlum led NMH with 20 first-half points. Brewster led 52-45 at the half.

Brewster quickly built a double-digit lead to start the second half, then Ben Callahan-Gold ’20 entered. Ben hit 6-8 from three-point range to get NMH back into the game and build a lead of their own. NMH also stepped up their defensive effort and limited Brewster's second-chance opportunities. NMH played with a 5-8 point advantage for the final four minutes before closing out the game from the free-throw line. NMH wins 96-85.

Another great team effort, NMH had four players in double figures — championship MVP Ledlum with 31 points, nine rebounds, four assists, two steals, and two blocks; Callahan-Gold with 20 points (6-8 from 3); Darius Ervin ’20 with 12 points, four rebounds and two assists; and Michael Jankovich ’19 with 11 points and two rebounds. This is the first time NMH has won back-to-back New England championships. It is their third championship in four years, and fourth in the past seven years.
It’s been a record-breaking season for NMH basketball as they head into the National Championship tournament. They set a new record for wins in a regular season (30) and a full season (32) with the championship win. University of Pennsylvania commit Max Lorca-Lloyd ’19 became the all-time winningest player (121) in NMH basketball history. He also owns the record for blocks in a season (114) and a career (318). Harvard University commit Ledlum is now the record holder for points (51), free throws made (18) and attempted (20) in a game, and for points (920), free throws made (222) and attempted (326) in a season. Ervin and Callahan-Gold tied the record for games played in a season (38). Head coach John Carroll ’89 hit his 300th win as head coach and is now the all-time winningest coach in NMH basketball history (309).

NMH got their 10th consecutive invite to the National Championship tournament. They face Scotland Campus at 5:15pm in the quarterfinals on Wednesday, March 6, at Connecticut College. Find more details about the tournament here.
Powered by Finalsite