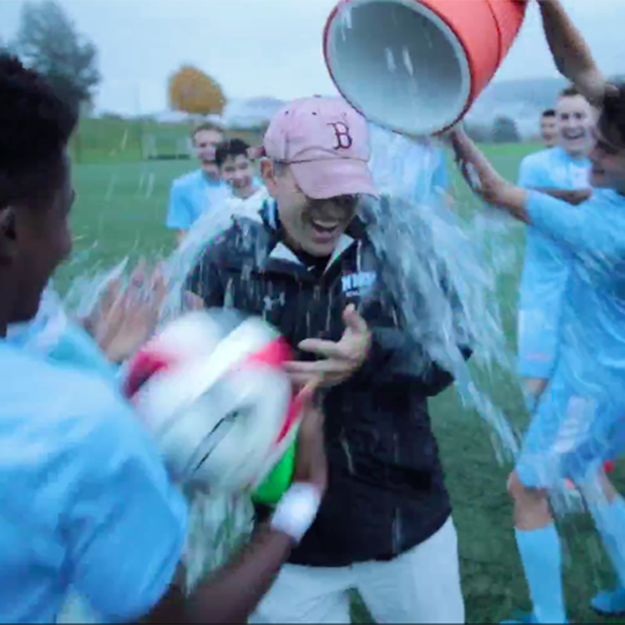 Nov. 6, 2018 — The final score in the boys’ varsity soccer game on Friday was NMH, 3; Cushing, 0. But as NMH’s players high-fived each other in congratulations, they were cheering for more than this particular win. One of their coaches, Charlie Malcolm, had just become the winningest coach in NMH soccer history.

It was Malcolm’s 146th win as the boys’ varsity coach, a statistic that pushed him past the record of 145 wins held by former coach Dick Peller. “This is an outstanding achievement in the 86-year history of boys’ soccer at Mount Hermon and NMH,” said Athletic Director Greg Leeds, who held an impromptu ceremony on the field after the game. “This team has won more New England Prep School Athletic Conference (NEPSAC) class A championships titles than any other prep school.”

But just as important as all the victories, Leeds continued, is Malcolm’s commitment to “character and sportsmanship.” Malcolm and co-head coach Jim Burstein ’87 are “constantly preaching about how to be a good teammate, how to win and lose with class and grace, and how to respect one’s opponents and applaud their high caliber of play,” Leeds said.

Malcolm’s players gleefully dumped a cooler of water over his head in celebration, and he grinned from ear to ear. “Yeah, I’ve been here for a lot of wins, but I never played in a game. This is everybody’s record,” he said.

Malcolm started coaching the boys’ varsity team in 2004. He’d spent four years with NMH’s junior varsity A team, racking up a 26-game winning streak over two seasons. His first two years with the varsity team were a struggle, though, with only three wins over two seasons. But with support from then Athletic Director Tom Pratt, Malcolm recruited new athletes and brought in Burstein as co-coach in 2006. Their partnership allowed Malcolm to keep teaching history classes and working with NMH’s international education programs in addition to coaching. That first season, their team went 15-3-1 and won the NEPSAC championship. Since then, Malcolm and Burstein have taken the team to the NEPSAC tournament eight times, earned a second championship title in 2010, and returned to the finals in 2014 and 2015.

“While this record-breaking milestone is Charlie’s, the partnership between him and Jim is an essential element of the program’s success,” Leeds said. “And each of them would be the first to say that this is a dynasty that Dick Peller built.” Peller served as head coach from 1976 to 1991 and again in 1996, racking up 145 wins and three NEPSAC titles. Jim Vollinger then continued the tradition of coaching excellence for 11 years, and his 1997 squad was the only team to win 16 games the season that they captured the NEPSAC title.

The bottom line is that Malcolm feels he’s upholding a legacy. He points out that as high school soccer players in the 1980s, both he and Burstein played for former NMH coaches — Malcolm for Dale Conley ’52 at Western Reserve Academy in Ohio (Conly coached at NMH from 1956 to 1967), and Burstein for Dick Peller at NMH in the mid-1980s. Malcolm said, “At the core of our success is our commitment to each other and to the relationships we build over the course of each season and school year. These relationships evolve into lifelong friendships.”