In 1980, Northfield Mount Hermon established the Athletic Hall of Fame. Its purpose: to honor the alumni, coaches, and members of undefeated teams who have demonstrated extraordinary athletic ability, sportsmanship, and leadership on campus, and who, even after they left Northfield Mount Hermon, continued to exemplify the school's mission of education — and life — for the head, heart, and hand.

Nominations for new members are accepted each year. To be eligible, alumni must have graduated at least five years prior. A committee made up of representatives from the athletics department, the Alumni Council, and the NMH Office of Alumni and Parent Programs makes the selections, and new members are inducted on campus during a special weekend each year. Previously submitted nominations will continue to be considered for future years. 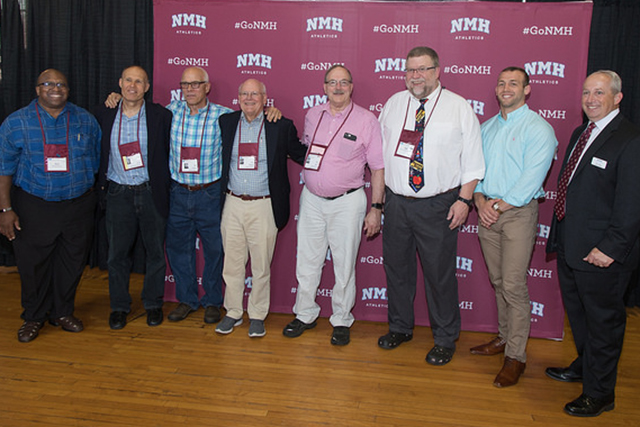 At Reunion Weekend 2018, the 1968 Boys' Varsity Wrestling Team was inducted to the Athletic Hall of Fame. The '68 wrestling team had an undefeated season (6-0), finished second at Class A, won National Prep Champion (Wilson), and three Class A Champions (Bretschger, Wilson, and Lee). View photos from the induction here.

We celebrate all individual members of the Hall of Fame in an online portrait gallery. See a list of inducted members. Portraits, plaques, and biographical information about the inductees are on display in Forslund Gymnasium and throughout campus.