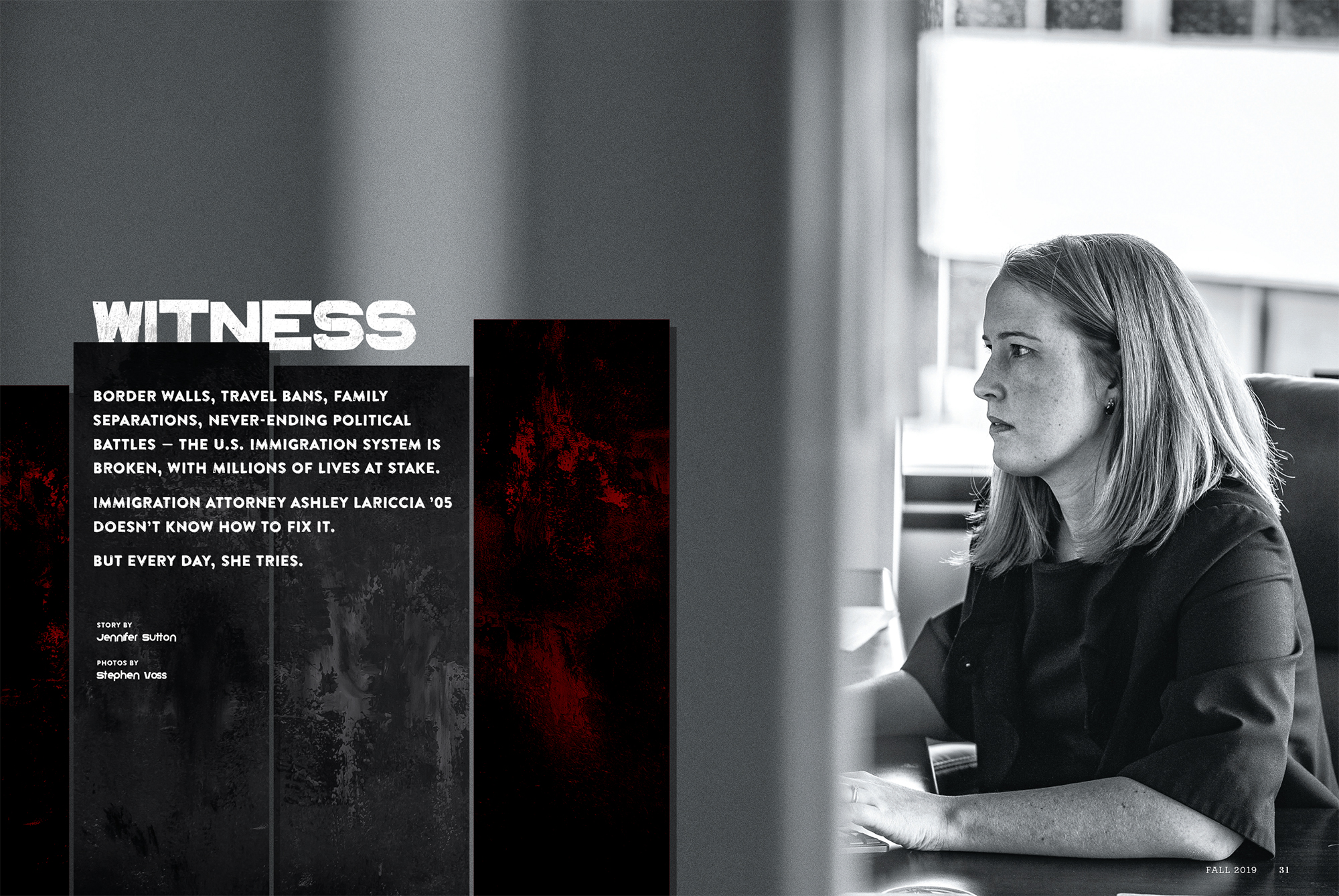 Immigration Attorney Ashley LaRiccia ’05 doesn’t know how to fix it.

But every day, she tries.

Last October, immigration attorney Ashley LaRiccia walked across the U.S.-Mexico border in Nogales, Arizona, and listened to a Honduran grandmother tell a story of murder and escape.

The woman told LaRiccia how local drug-cartel leaders shot her pregnant daughter and two granddaughters and left them for dead. One of the young girls survived, and the grandmother reported the incident to police, who did nothing. Afraid for her family’s lives, she and her husband, son-in-law, and surviving granddaughter fled north and walked for weeks to Nogales, hoping to find safety in the United States. She showed LaRiccia her granddaughter’s scars and photos of her murdered daughter. Later that night, LaRiccia wrote on Facebook, “I’ve heard many horrible stories over the years, but today I found myself fighting back tears, which rarely happens.”

LaRiccia was volunteering temporarily with the Kino Border Initiative, a nonprofit advocacy group run by Catholic priests and nuns. She went back and forth between Arizona and Mexico for a week, providing immigration screenings and asylum orientations to migrants as they crowded together at the border. “It was chaos,” she says. “Everyone was just waiting. Families were sitting on the ground, and we had to walk right by them. We constantly felt like we were abandoning them. They’re vulnerable to violence and sex trafficking, but all we could do was explain the system and how to be prepared.”

Most of the time, LaRiccia explains immigration laws from an office 2,000 miles away from Nogales, beyond the headlines about national emergencies and political battles, beyond the crisis of families being separated and detained at the border. She’s an attorney at Hogar Immigrant Services in Alexandria, Virginia, which is a part of Catholic Charities of the Diocese of Arlington, Virginia. She works with clients from Central and South America, the Middle East, and Africa, helping them apply for asylum, green cards, citizenship, and a host of other “statuses.”

Her clients aren’t in immediate danger like the asylum seekers at the Mexican border, but their lives have grown increasingly precarious, and “there is so much fear,” she says. It used to be that mainstream politicians sounded the same when they talked about immigration, with neither Democrats nor Republicans being true immigrant advocates, LaRiccia says. Obama started the DACA (Deferred Action for Childhood Arrivals) program, but the policy of family detention began during his administration, and more people were deported when he was president than during any other administration. But “you didn’t feel as if the people in charge were anti-immigrant,” LaRiccia says. “The demonizing of people that we’re seeing and hearing now — that’s the scariest part.”

On Wednesdays, LaRiccia and her colleagues at Hogar Immigrant Services conduct “intake.” Immigrants and refugees who need legal help can show up without an appointment and wait to see an attorney. The consultations are free and last 45 minutes to an hour. If LaRiccia or another attorney takes the case, the clients pay a minimal fee, or, if they are unable to pay, none at all. Most of them cannot afford a private attorney.

The Hogar office, in a nondescript building in a strip mall surrounded by highways, opens at 9 a.m. By 8, there are a dozen people lined up in a narrow hallway outside the door. If it’s raining, there are more, LaRiccia says. “A lot of our clients have construction jobs and they can’t work if the weather is bad.”

Most of them are too wary to allow an outsider to observe their meetings at Hogar. But Martina (a pseudonym) agreed. She first sought assistance at Hogar in 2017. She came to the U.S. nearly 10 years ago from El Salvador, has a green card, and works full time at a restaurant. She’s meeting with LaRiccia to practice for an interview with the U.S. Department of Citizenship and Immigration Services (USCIS) about her adult daughter who has severe Down syndrome. The daughter is eligible to become a U.S. citizen, but because of her disability, Martina is asking USCIS to exempt her daughter from the mandatory citizenship test and the recitation of the oath of citizenship. 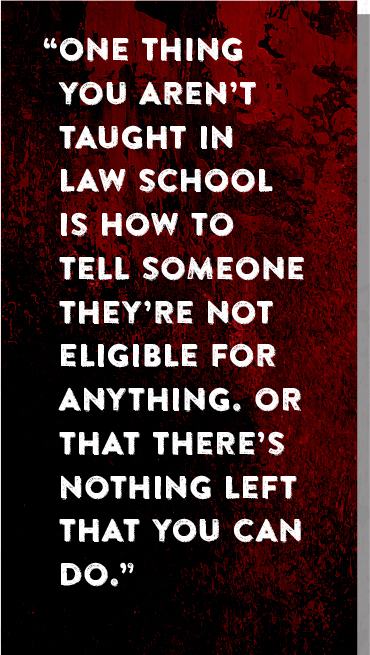 LaRiccia pretends to be a USCIS officer.

“Has your daughter ever committed a crime?”
she asks.

“Has she ever had military training?”

“Has she ever sold weapons?”

“Has she ever worked in a prison?”

In fluent Spanish, LaRiccia describes for Martina how the interview will unfold. She also notes that interviews at the USCIS often run late, so it can take a while, and it’s best to be calm and patient. “I have to remind myself that the USCIS officers are overworked and they probably won’t see the file until 15 minutes before the interview,” LaRiccia says. “Getting annoyed and defensive doesn’t help anyone.”

Yoselin (also a pseudonym), another client, comes from a Central American country that she and LaRiccia do not want to be identified. Yoselin is in her 20s, came to the U.S. on a tourist visa with her family when she was a small child, married an American, and is pursuing a bachelor’s degree. She currently holds DACA status, and wants to apply for a green card. The problem is that two decades ago, when she was a young child, her parents requested asylum but got confused about their court date and missed their hearing. Removal orders were issued for every member of the family. Now, that removal order is a major roadblock in Yoselin’s green-card application — and a constant source of fear.

Yoselin’s story is a common one, LaRiccia says. And while the facts of the case are compelling — because Yoselin was so young when her removal order was issued — all DACA cases have been complicated by political battles over the border wall. “A few years ago, an immigration attorney would be able to talk to a government attorney and collaborate on a joint motion to reopen the case,” LaRiccia says. “The climate is different now. Even though Yoselin has
it great compared to so many others, people like
her are being used as bargaining chips.”

The dilemmas of immigration weren't part of LaRiccia's childhood in New Hampshire.  After NMH, she went to Georgetown, thinking she’d become a diplomat. She changed her mind during a summer internship at the U.S. Consulate in the Dominican Republic. “Santo Domingo was a hot spot for immigration-visa fraud, and I got to observe and participate in interviews with married couples where the immigration officer suspected fraud. Often there was fraud, but there was also a lot of arbitrariness in the decision making. And I was really interested in the stories of the people who were trying to come to the U.S.” Back at Georgetown, LaRiccia signed up to take the law school admission exam instead of the foreign service exam.

Following law school at the University of Maryland, LaRiccia won a two-year Equal Justice Works fellowship in Atlanta, where she worked with Lutheran Services of Georgia to build a program for unaccompanied migrant children. This was in 2014, right around the time of the first border crisis, when the number of children crossing into the U.S. from Central American countries jumped dramatically.

She continued representing children at Kids in Need of Defense (KIND) in Baltimore, where some of her clients were coming to the U.S. to join family members they barely remembered. The work was hard. She says, “Try reuniting a 17-year-old boy with his parents when he’s never had parents before. Try telling him he has to go to school when he hasn’t been in school since he was 12.”

LaRiccia joined Hogar two years ago, and is now the supervising attorney. Her clients can be suspicious of the legal community, but Hogar’s affiliation with the Catholic Diocese of Arlington helps. “A lot of our Central American clients are Catholic, so even though we’re not representatives of the church, they feel a sense of safety.”

So much so that they walk into LaRiccia’s office and unburden themselves. She says, “They understand right away: They have to tell us everything. Especially with asylum cases or cases that involve domestic violence. If they’re men, or if they’re single moms who have no time to talk to anyone or who don’t have friends here, I might be the first person they’ve talked to. Sometimes I wish I had a therapy background. Because for the first meeting with a client, I’m really just listening.”

Many of LaRiccia’s clients from El Salvador
and Honduras have “temporary protected status” (TPS), which is a short-term legal status and work authorization granted to people from specific countries following natural disasters such as earthquakes or hurricanes. For years, they have been allowed to renew their status every 18 months. Now the program is set to expire in January, and they are panicking.

“These are people who have been in the country for 20 years or more,” LaRiccia says. “They’ve built lives here. They’ve gotten married, had children who are U.S. citizens; a lot of them have started businesses. We’ve let them take out loans and employ other people. We’ve taken their money in taxes. They’ve never gotten anything in return, except what they created themselves. They don’t receive public benefits like Medicaid. And now we’re just going to take their status away?”

LaRiccia doesn’t claim to have answers. “I’m not a policymaker,” she says. “Our immigration system is a huge problem and it feels impossible to know where to start. But I would like our laws to respect the humanity of individuals.” Of the migrants trapped at the U.S.-Mexico border, she says, “You should not have to fight your case from inside a detention center that is run by a private prison and has terrible conditions, or from a makeshift refugee camp in Mexico.”

Not every immigrant can come to the U.S., LaRiccia acknowledges. And countries must have processes for admitting them. “But we will always have people who are willing to come here without documents because the situations they are escaping require that for survival. As long as there are jobs in the U.S., as long as Americans don’t want to pay for food picked by Americans earning a living wage, immigrants will come. They are desperate for a paycheck.”

The climate of stress and fear in which LaRiccia’s clients live also takes a toll on her — a much lesser toll, to be sure, but, she says, “One thing you aren’t taught in law school is how to tell someone they’re not eligible for anything. Or that even though their application has been pending for two years, there’s nothing left that you can do.”

To combat “vicarious trauma,” LaRiccia has begun participating in the American Family Therapy Academy’s Witness to Witness program — free counseling sessions for immigration attorneys and other “first responders.” She encourages her Hogar  colleagues to do the same. “Because if we burn out,” she says, “that’s not helpful to our clients.”

It’s also important to “celebrate small victories,” she says. Every Friday at Hogar, the attorneys meet to share positive developments, like when a client’s work permit gets approved. “Maybe it’s not an asylum win, but even a minor change can have a huge effect on someone’s life,” she says.

Those positive moments are often a long time coming. When LaRiccia was working with migrant children in Georgia five years ago, she spent months navigating inhospitable state laws to help a 16-year-old Honduran girl obtain legal status in the U.S. through a special immigrant juvenile visa. “I didn’t think she understood how much I cared about her or how much work I did,” LaRiccia says. Last fall, the girl messaged her on Facebook. LaRiccia doesn’t Facebook-friend her clients, but the girl tracked her down and wrote, “Abogada” — lawyer — “I don’t know if you remember me, but something came in the mail, and I thought you might want to see it.” Attached was a photo of her new green card.