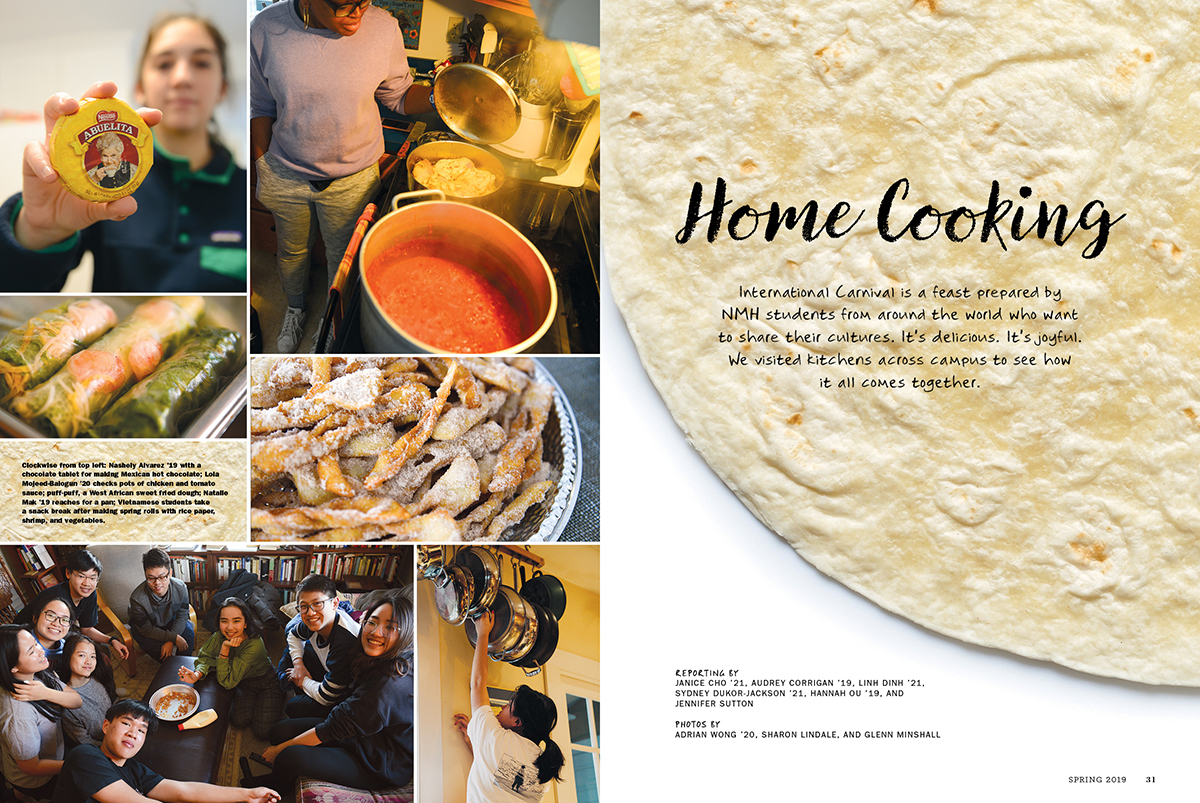 International Carnival is a feast prepared by NMH students from around the world who want to share their cultures. It’s delicious. It’s joyful. We visited kitchens across campus to see how it all comes together.

Every year, on the Saturday after Martin Luther King Jr. Day, dinner in Alumni Hall transforms into a global food festival. Nearly 200 student chefs spend a couple of days chopping, sautéing, baking, and deep-frying dishes from their home cultures to serve to hungry classmates and faculty. This year marked NMH’s 41st International Carnival, according to Dean of Global, Experiential, and Community Engagement Angela Yang-Handy. “It’s a way for students with different backgrounds to share their core selves, and make the invisible visible,” she says.

The SPANGLISH student group is elbow-deep in empanada fillings. Advisor Angelita Castañon looks over the shoulder of Sonia Hernandez ’20 as Hernandez chops potatoes. “You want nice thin slices so they’ll fry really well, soft on the inside and golden and crispy on the outside.” SPANGLISH is open to any student of Spanish-speaking heritage: Hernandez is Mexican and Puerto Rican, but grew up in Virginia and now lives in France; Erick Jara ’20, who is rolling out circles of dough, is Ecuadoran and lives in New York. “When I was in middle school, I was the only Hispanic person, and it didn’t feel great,” Hernandez says. “At NMH, I feel represented. It’s nice to be in a community where my culture is not only shared but also celebrated.”

Onions and chocolate at the same time? Yes, if your menu includes potato latkes and hamantaschen, the triangle-shaped cookies named after a villain in the Hebrew Bible. In the kitchen of faculty members Jennifer and Sam Keator, members of the Jewish Student Alliance have forgone the traditional hamantaschen fillings of poppy seeds and apricot jam in favor of chocolate. Miles Savitz ’19 is directing the show here, and he’s also hoping to make challah, the braided bread that is a staple of American Jewish food. “As far back as I can remember, my dad would make challah for Friday-night Shabbat dinner,” Savitz says. “When my brother and I got old enough, we started to take it on.”

The apartment of chemistry teacher Nhu Hoang is filled with the scent of shallots, garlic, and fish sauce. A few members of the Vietnamese Student Association knock on her door, and she calls out, “Come in, I don’t like cooking alone!” Preparations for gỏi cuốn (fresh spring rolls) get underway: Jimmy Tran ’21 slices just-boiled shrimp; Hoang Truong ’20 and Jamie Phan ’19 pick piles of mint and cilantro leaves. Next up: making omelets for the vegetarian
gỏi cuốn and pitting avocados for smoothies.

Michael Wang ’20, of the Hong Kong Students Association, ties on an apron in the kitchen of Allyson Goodwin ’83, P’12, ’14, NMH’s chief advancement officer, and faces 25 pounds of chicken with a cleaver in his hand. He’s making “Swiss chicken,” which involves copious amounts of soy sauce and sugar, and is “a very common Hong Kong dish,” according to Adrian Wong ’20. Today, “all the international students have the same goal,” adds Natalie Mak ’19. “We want to make really good food and show off our countries — what we’re proud of.”

“For me, three months without fried plantains is a long time,” says Manuela Pacheco ’20. She’s in the kitchen of Claude Anderson, dean of enrollment, and she’s eyeing a bunch of plantains that are waiting to be peeled, sliced on the diagonal, and fried twice. They’re called “plantanitos” in Colombia, where Pacheco is from — and “fritos” in the Dominican Republic, where they’re commonly eaten with fried salami and fried cheese and ketchup, says Arle Cruceta Garcia ’19. For International Carnival, the South American and Latin Students Association (SaLSA) is keeping the fried plantains simple, and serving them alongside cheese quesadillas and sweet empanadas with dulce de leche inside.

“Dulce de leche translates to ‘milk candy,’” says Pacheco. “It’s like caramel, but better.” Natalia Onate Gomez ’19, who’s from Mexico, practiced making it with her mother when she was home in Mexico over winter break — you submerge cans of sweetened condensed milk in boiling water for several hours until the milk turns light brown, she says. But this time, it’s not quite done, and there’s lots of discussion about how to proceed. Too many cooks? Not at all, says Alejandra Ladines Porras ’19, who’s from Ecuador. “With Latino families, there’s always at least five people in the kitchen.” 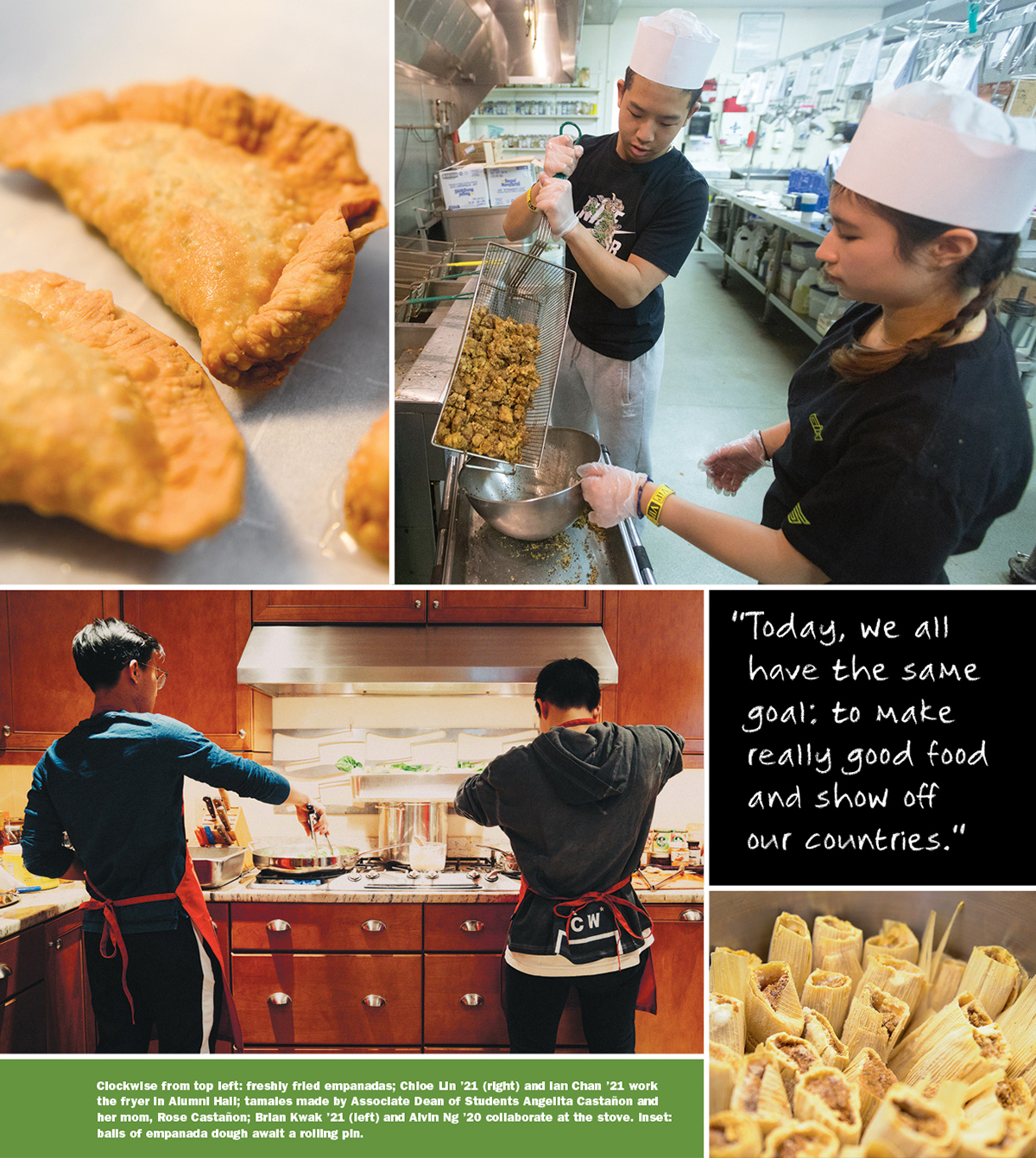 When it comes to Japanese food, “sushi and ramen are usually all people think about, and both of those foods are overrated,” opines Taishu Tozawa ’19. That’s why the Japanese Student Association is making takoyaki, sticky rice stuffed with pieces of octopus, in the apartment of Mona Seno, chair of the visual arts department. Tozawa says he likes gathering with his fellow Japanese students because “it’s easy to forget our culture in a place like NMH, where so many cultural backgrounds are melting into each other,” he says. Speaking Japanese is a way “for us to still have our culture as our foundation.”

“I am so excited. I love food!” says Claudia Lau ’20. The Australian has commandeered the dorm kitchen in Wallace to make fudgy rum balls, although Lau’s version leaves out the rum. The dessert is Hungarian, but Lau says it’s traditional at Christmas for many Australians. She has deputized some non-Australian friends to help roll the rum balls as she turns her attention to her next dish: pavlova, a layered dessert of meringue, freshly whipped cream, and berries.

“I only see my parents every six months, so International Carnival feels like my connection home,” says Lydia Princess Obi ’19, who’s from Nigeria. “When we were making drinks last night, I was so happy.” By “we,” Obi means members of the African Students Association, and by drinks, she means huge thermos coolers of “Chapman,” a black currant juice concoction, and “Gingère,” a spicy Senegalese drink with fresh ginger and several fruit juices. Now, Obi stands over the stove in the home of Joanne Dowdy, who’s married to English teacher David Dowdy. With Ngone Fall ’19 and Lola Mojeed-Balogun ’20, she’s cooking a batch of tomato sauce that will go into jollof rice, an African staple. “You cannot go to a party without jollof rice — that would be an outrage!” says Fall, who grew up in Senegal.

The time has come! Everyone has brought all the food they’ve been cooking to the dining hall, and now they run back and forth from the kitchen to the dining area, filling aluminum steam trays with the fruits of their labor. Other students stream through Alumni Hall’s main entrance, eager to fill their bellies. Hannah Ou ’19 quizzes fellow Korean students about what they made: japchae, stir-fried glass noodles; tteok bokki, braised rice cakes; and buchimgae, a pancake with scallions and kimchi. “We’re also having a spicy noodle challenge,” declares Kevin Kim ’20. “Not a lot of people will be able to eat this dish. If they do, we’ll give them extra food. They’ll have personal glory, too!” 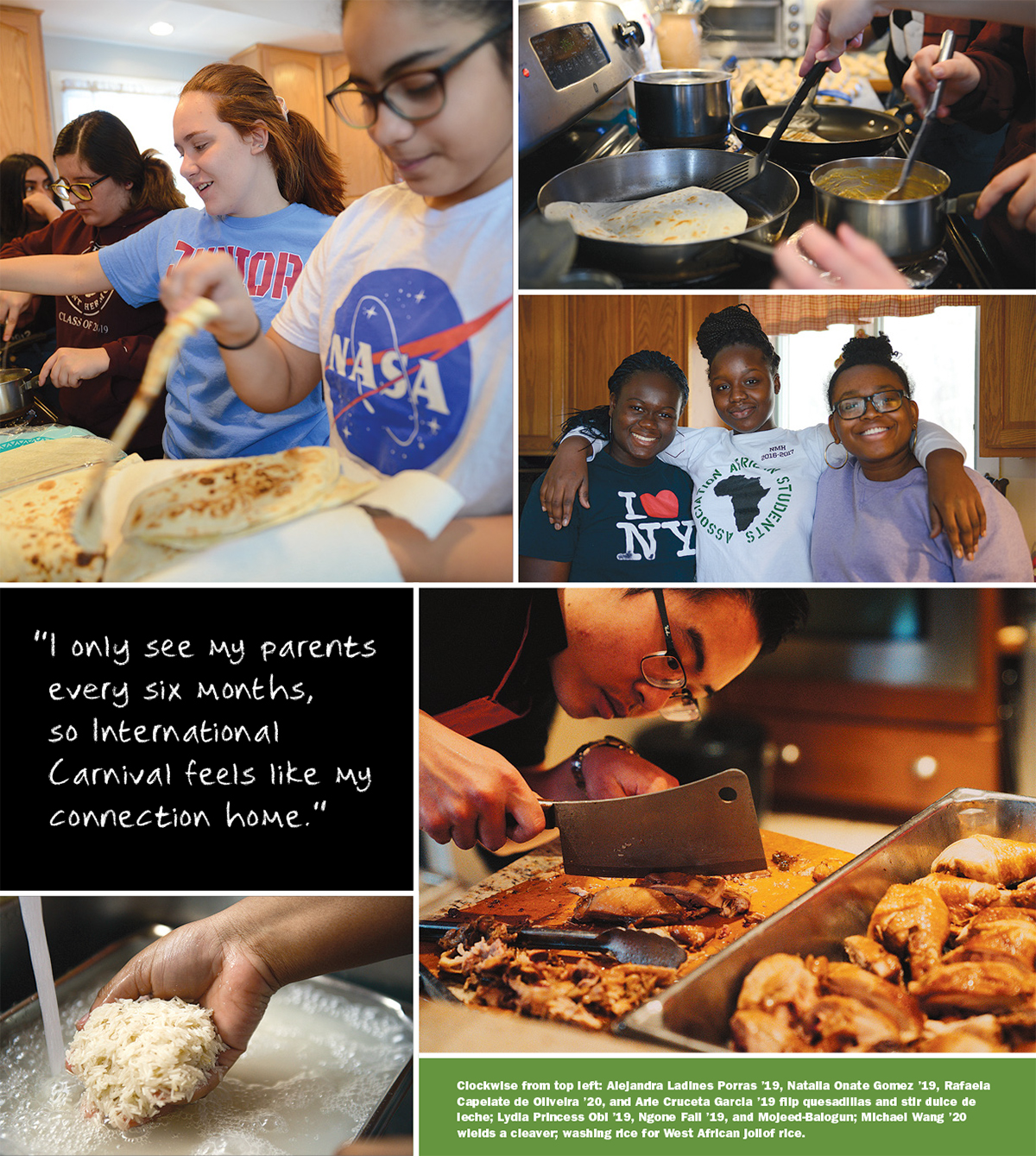 Jada Scotland ’19 stands by a table laden with foods from the Caribbean and West Indies, pointing out jerk chicken from Jamaica, a Guyanese rolled cake called salara, and sorrel, a hibiscus-like drink made from boiled leaves and spices that her family, who’s from Dominica, makes during holidays. Scotland offers a glass of the ruby-red liquid. “This is me giving a piece of my background to everyone else,” she says.

The crowds have thinned, and cleanup has begun. Carrie Quimby, assistant director of dining services, grins and nods: Yes, it was chaos in the kitchen. But “we got everyone to wear gloves and aprons, and there were no mishaps, even with the deep fryers and the hot oil,” says sous chef Chris Pappademus. This was Pappademus’s first year helping with International Carnival, and Quimby’s 18th. “I’m very good at being calm,” she says. “It’s an afternoon of nonstop running around, but it’s my favorite night of the year.”