What do Abigail Adams, the #MeToo movement, and the Northfield School for Girls have in common?

Early one morning last spring, teacher Chris Edler took her Women’s History class over the Connecticut River for a tour of the former Northfield School for Girls. NMH Archivist Peter Weis led the group around the campus, stopping first at Round Top, the grassy hill where school founder D.L. Moody and his wife, Emma, are buried.

“Is it disrespectful to take pictures?” one student asked. And then: “Why doesn’t it say ‘husband of Emma?’ on D.L.’s grave when it says ‘wife of D.L.’ on hers?”

Edler nods, as if to say, Bingo! That century-old disparity between Mr. Moody and Mrs. Moody epitomizes why women’s history classes exist. “We’re at a critical juncture where women are making some incredible strides, but in other ways — no,” Edler says. To understand how slowly society changes, she adds, just look at today’s Fortune 500 leaders; only about 5 percent are female. NMH’s Women’s History course aims not only to examine the past, but also “to show girls and young women that yes, they matter; what they have to say matters.” 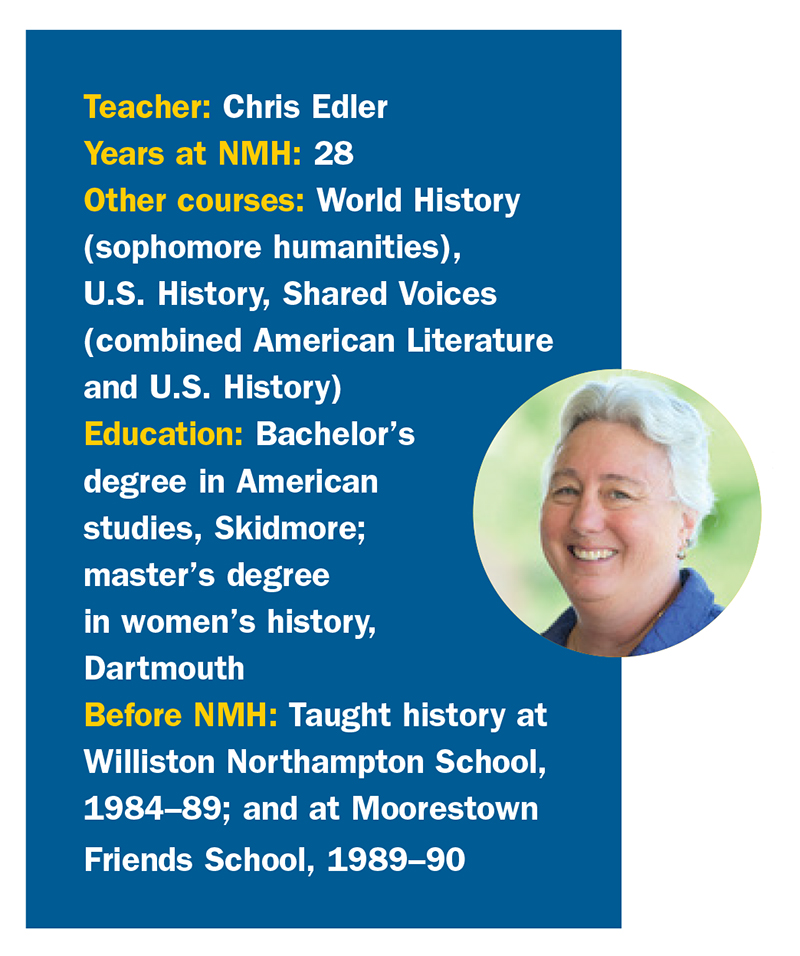 Edler kicks things off with Abigail Adams. She has her students read the 1776 letter Adams wrote to her husband, John Adams, who was working with the Continental Congress to craft the Declaration of Independence. She advised the Founding Fathers to “remember the ladies,” and warned, “We are determined to foment a rebellion and will not hold ourselves bound by any laws in which we have no voice or representation.”

From British writer Mary Wollstonecraft to the 19th-century suffragists Elizabeth Cady-Stanton and Susan B. Anthony, from second-wave feminists Betty Friedan and Gloria Steinem to the U.N.’s “Convention on the Elimination of All Forms of Discrimination Against Women,” from the first woman Supreme Court justice Sandra Day O’Connor to the writer bell hooks, Edler and her students explore how women around the globe struggle to find the “voice” that Abigail Adams wrote of.

The class also zooms in and examines what’s right around them — not just Northfield, but also stories about their own lives and families. Edler says, “I want students to get a sense of why they are where they are, why they have the opportunities they have” — in other words, how they fit into the history they’re studying. “The class allowed me to see where issues that I care about stem from,” says Isabel Lewis ’18. Liza Riehs ’18 recognized how Susan B. Anthony’s labor activism in the mid-1800s “helped pave the way so that during my summer job, I am paid the same amount as my male co-workers for doing the same work.” Amanda Aalto ’18 hadn’t realized that certain rights she takes for granted, like being able to drive, or voting, aren’t universal — alluding to Saudi Arabia, where women couldn’t vote until 2015, or drive until last year.

Everything happening now rests on the bedrock of women who came before.

And a women’s history class today would feel incomplete without considering the #MeToo movement, which exploded a year ago with dozens of accusations of sexual assault leveled against the American film producer Harvey Weinstein. Is the class more relevant now, after a year of women speaking out publicly in the U.S. and around the world about assaults and harassment? Edler says no. “The class is women’s history, not women’s issues,” she points out. “There’s a lot of overlap, but it’s important to remember that everything happening now rests on the bedrock of the women who came before.”

One challenge of the course is how to bring in the other side of the story, or the other voice in the conversation: that of men. Not many boys show up in the classroom. It’s unfortunate, Edler says, and a little puzzling, because the course is not about “berating men.” There were plenty of men, like the journalist, suffragist, and abolitionist William Lloyd Garrison, who joined women in their fight for equity during the mid-1800s. “We’re simply learning about another part of history,” Edler says, like African American history or immigration history.

A different challenge — a good one — is that the discussion-based class “goes where the students take it.” They might start the day with Betty Friedan and end up talking about the #MeToo movement. Or start with Susan B. Anthony and end up examining how gender and sexism intersect with race and racism. Or start with Emmeline Pankhurst, who was criticized for her political activism in England, and end up with Gloria Steinem. “I never know what connections they’ll make, and that’s exciting,” Edler says.

In the end, the course is designed to feed students’ desire for change. Isabel Lewis, for one, envisions a history curriculum in which men and women are equally represented, so “there would be no need for a women’s history class.” Edler says, “I want students to understand that everything women have gone through in the past 200 years has been a fight taken up by ordinary citizens. They can be part of whatever comes next.”