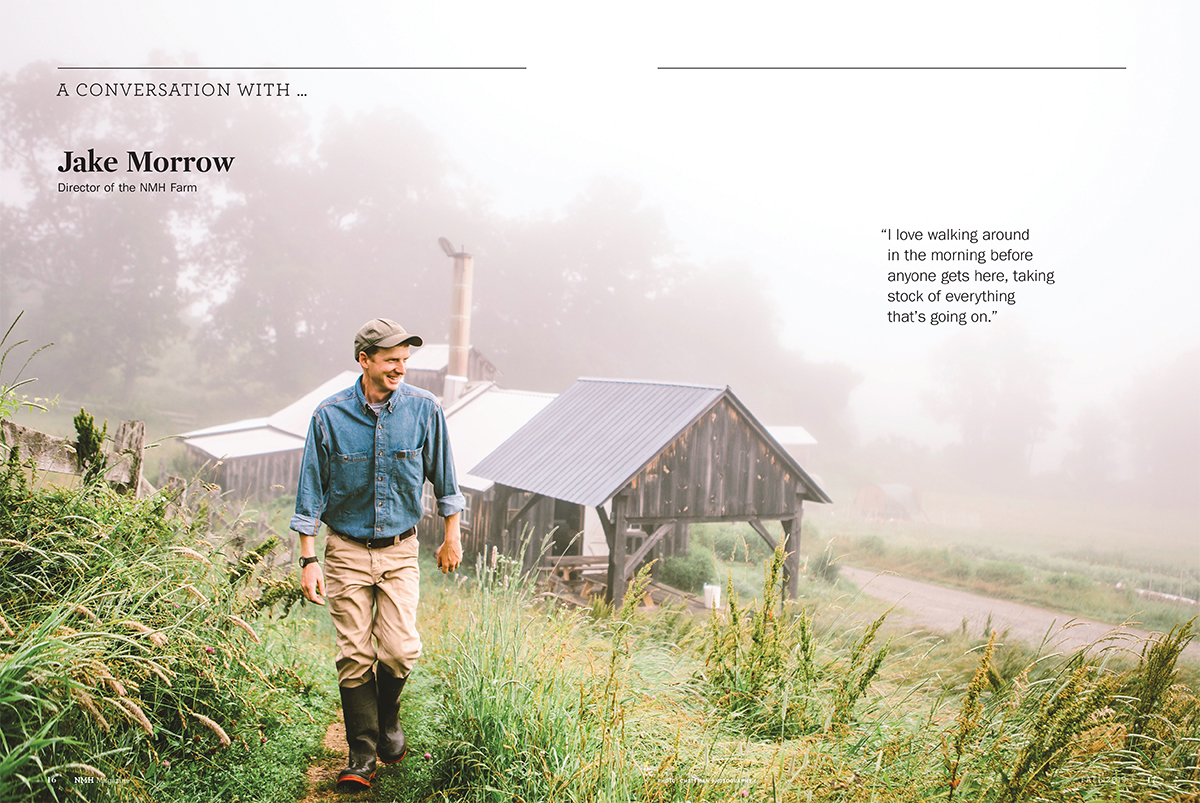 Jake Morrow grew up in the manicured town of Princeton, New Jersey; earned undergraduate and graduate degrees in classics, and studied with the chief Latinist at the Vatican in Rome. But the place where he felt most at home as a kid was his grandmother’s old farm in the mountains of western Pennsylvania, and as he got older, he was drawn to working outside, with his hands. He says, “I always had these disparate urges.”

“I love walking around in the morning before anyone gets here, taking stock of everything that’s going on.”

Why Classics
When Morrow was 14, he heard his mom’s friend and Princeton scholar Robert Fagles read from his much-heralded translation of The Odyssey. “I was sold. The story was just like me, just like the people I knew, except that it happened 2,700 years ago.”

About- Face
Morrow had an epiphany when he was in graduate school at the University of Chicago. He lived in a sixth-floor apartment on the city’s south side and read ancient Greek and Latin literature while across the street, kids played basketball in a parking lot with a milk crate for a hoop. “It was as ivory tower as you could get. I thought, ‘What am I doing here?’”

Head vs. Hand
“I’d always been told, implicitly, by my education, that if you go to college, you should end up doing intellectual work, and if you end up doing manual labor, then you blew it. But that’s a fallacy. To do a good job as a farmer, I had to turn myself into a student of ecology and environmental history. I did farm work by day, and at night, I read books by Wendell Berry and Michael Pollan and Sir Albert Howard and Aldo Leopold — anything about farming and agriculture that I could get my hands on.”

Why NMH
“When I heard about this school in western Massachusetts that espouses education for the head, heart, and hand, I thought, ‘That’s what I’m looking for — a place where people value the work you do sweeping the floor or chopping vegetables in the kitchen as much as the arguments you make in a paper.’”

Guideposts
“Farms are an invitation to pay close attention. I love walking around in the morning before anyone gets here, taking stock of everything that’s going on. It helps me keep in mind the three goals that we have: to care for the land; to involve students in everything we do; and to feed the community — to connect the community to the farm.”

Team Compost
“I love how the pieces come together. The horses pull the manure spreader to spread compost on the vegetable fields, and students help bring seedlings down from the greenhouse and plant them; then we harvest, and we get to see those vegetables in the dining hall. I like being part of this bigger whole.”

New Crop
“I’m excited about the young orchard that we’ve planted. Apples have been part of the farm going back to the 1890s, but (former farm director) Richard Odman had to abandon the orchard because of concerns over pesticides. But organic orcharding has come a long way, so in four or five years, we’ll be making cider from our own apples again.”

Hark!
“In the morning, I often get to see the sun rise, and I think of the first scene of Hamlet, when Horatio and Marcellus and Bernardo have just seen the ghost of Hamlet’s father and they’re terrified. But the sun rises and the ghost flees and Horatio says, ‘But look, the morn, in russet mantle clad, walks o’er the dew of yon high eastward hill.’ I just love that line. Sometimes I’ll say it out loud. Then I go back to shoveling manure.”