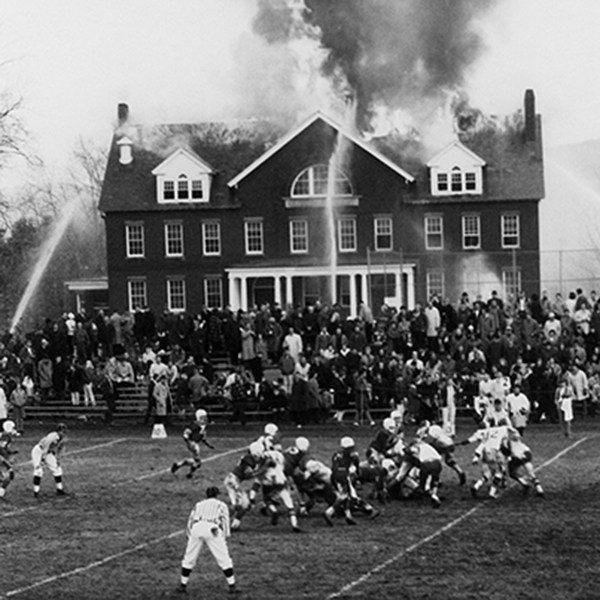 The Game Must Go On!

Nov. 19, 2015 — Fifty years ago on Nov. 20, the Mount Hermon football team was hosting arch-rival Deerfield Academy when the already-emotional game took a very unexpected turn.
Flames shot out of Silliman Hall, the science building behind the bleachers. With firefighters still on their way to the scene, administrators huddled on the sidelines and decided the best way to ensure the crowd’s safety was to keep them in the stands.

So an atmosphere of calm prevailed, spectators stayed in their seats, and the season-ending game didn’t flame out. Instead, players continued passing and running, and the band played at halftime, as Silliman Hall smoldered in the background.

“It seems really odd that people would keep playing football in front of a fire,” admits NMH Archivist Peter Weis ’78. “But the fire was contained pretty quickly, and Silliman was farther away from the spectators than the photograph makes it appear. It’s not as if people in the stands could turn around and toast marshmallows.”

Read eyewitnesses’ memories of the event, published in the NMH Magazine.

Watch a video about "the day that a fire couldn't stop football" produced by NFL Films Presents.