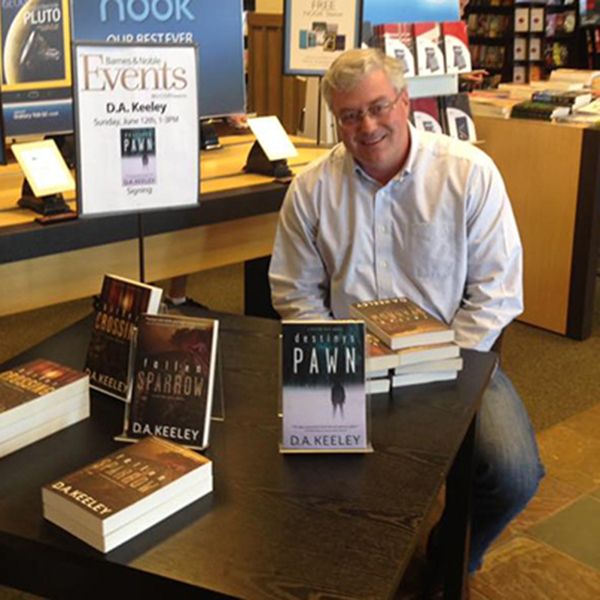 Oct. 17, 2016 — John Corrigan is a man of many aliases, but in a good way. The Northfield Mount Hermon English department chair is a teacher and an author, a golf enthusiast and blogger, and possibly the only mystery writer in America who’s also a dorm parent.

So far, he’s produced nine novels, published under his own name and also under the pen names D.A. Keeley and K.A. Delaney. “One of the great things about writing is that you can reinvent yourself as many times as you want,” he says.

Corrigan typically rises before dawn and writes for an hour and a half each day. “Everything is quiet. It’s just the dog and me at 4 am,” he says.

Corrigan could always write. From his first story — completed when he was in second grade — to this year’s Destiny’s Pawn, he says “output is easy.”But reading was difficult for the young Corrigan, who has dyslexia. When his seventh-grade teacher urged his mother to keep him reading, she gave John books by detective fiction master Robert B. Parker. “That changed everything,” Corrigan recalls. “I’ve always liked the genre. As I tell my students, crime literature shows you the best and worst of humanity.”

He took every English class his university offered, then honed his journalistic skills on the city desk of upstate New York newspapers before becoming a teacher. For the past 20 years, he’s taught high school and college-level English. At NMH, he teaches Advanced Placement Language and Composition and, fittingly, Crime Literature.

Corrigan can readily identify with his NMH students’ compositional struggles since he pounds out prose every morning himself. “Writing never gets any easier,” he admits. But lessons Corrigan learned through journalism and novel-writing help ease his students’ way.
“I try to give students interesting essay prompts that challenge them to find their voice and to synthesize what they’re reading, the outside world, and their own thoughts in a succinct way that holds the reader’s interest,” he summarizes.

And Corrigan takes his own advice when writing crime fiction.

His first crime series fulfilled a graduate-school dream of writing novels that “take Raymond Chandler to the PGA tour.” His five Jack Austin novels star a pro golfer with dyslexia who finds the sport more life-and-death than he’d bargained for. And like Chandler’s hard-boiled detectives, Corrigan’s private eye is a man of honor. The first Jack Austin book, Cut Shot, was hailed by Robert B. Parker, the “dean” of American crime fiction, as “a riveting novel with characters you care about, well conceived and gracefully presented.”

While living in his native Maine, Corrigan got to know border-patrol agents whose experiences became the seed of a new series, about take-charge border-patrol agent and single mom Peyton Cote. This trilogy, like all his novels, was meticulously researched so every detail rings true. “Because of TV, police procedurals have to be 100 percent accurate or people will notice,” he says.

Now Corrigan is developing a new idea — a mystery set at a boarding school. He’s quick to say that it will not be about NMH. “I’m not oblivious to the world around me, but I write fiction,” he emphasizes.

And Corrigan says he must write, feeling agitated and stressed when he isn’t writing. “The stories have always been there; they have to come out.” — By Emily Weir